Summary: After first-order logic was introduced in 1879, at least a century passed without successful attempts to make it understood by the masses. SBVR (in OMG) and CL (Common Logic in ISO) are recently approved standards that indicate that there is now enough support to start using logic on a much larger scale. In this month's issue of the 'Semantics for Business', Sjir Nijssen begins a series of articles to introduce first-order logic to a wider audience, with a strong focus on semantics. This article concentrates on what are called ground facts and fact types in SBVR.

After Frege introduced first-order logic in 1879, at least a century passed without successful attempts to make it understood by the masses.  SBVR (in OMG) and CL (Common Logic in ISO) are recently approved standards that indicate that there is now enough support to start using logic on a much larger scale.  This has many substantial advantages.  In practice many people employ the essence of logic, without ever thinking of the underlying theory.  Historically, introductions to logic have often failed to give adequate attention to the fact that semantics is of prime importance.  This article is the first in a series of articles to introduce first-order logic to a wider audience, with a strong focus on semantics, using the CogNIAM (Cognition enhanced NIAM) approach.  This article concentrates on what are called ground facts and fact types in SBVR.

First-order logic has many advantages over other formal languages.[8]  SBVR[6] is a standard based on first-order logic.  CL (Common Logic)[3] is a recently-accepted ISO standard based on first-order logic.  If first-order logic is effectively taught and expressed in Controlled or Structured English or any other controlled natural language, the advantages will be enormous.[5]  By using everyday natural language, people are already thoroughly accustomed to using logic, even though most have never been introduced to "the formidable notation, which doesn't bother mathematicians, but [...] is an instant turn-off for many other people."[9] [1]  Hence it is a matter of awareness and integration, instead of applying a traditional stovepipe approach.

In addition, instead of using the arcane notation of first-order logic, people are invited to use the natural language based notation of CogNIAM, which "is as precise as any formal notation, but as readable as their familiar (natural) language."[9]  CogNIAM is a speech community, utilizing as much diagramming as possible, within the semantic SBVR community.  In this way, we can expect a large number of advantages in many different areas.

2  The components of a ground fact

In Figure 1 we see the shape of a certain country.  That country is referred to by the name "France". 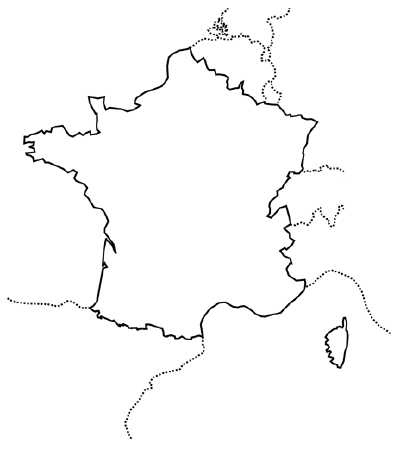 The verbalization of Figure 1 could be:  "France is the name of an individual country."

In Figure 2 the shape of a well-known symbol is used as reference to a well-known city.  That city is referred to by the name "Paris".

The verbalization of Figure 2 could be:  "Paris is the name of an individual city."

The contents of Figure 3 can be verbalized as follows:

"The city Paris is the capital of the country France." 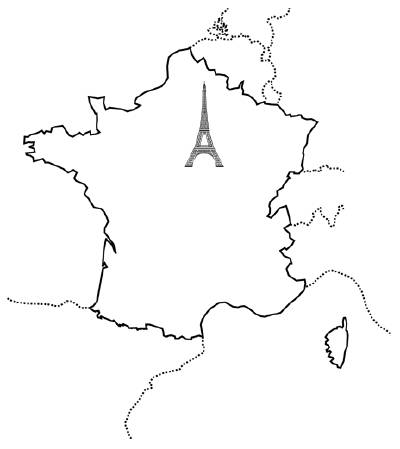 Figure 3.  Country and its capital

We could give a second example fact with the same fact structure.  This example is represented in Figure 4. 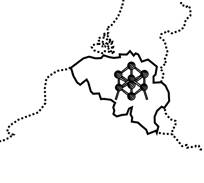 Figure 4.  Country and its capital

The fact represented there is:

"The city Brussels is the capital of the country Belgium."

The contents of Figure 5 can be verbalized as:

"Rome is the name of an individual city."

The contents of Figure 6 can be verbalized as:

"Spain is the name of an individual country." 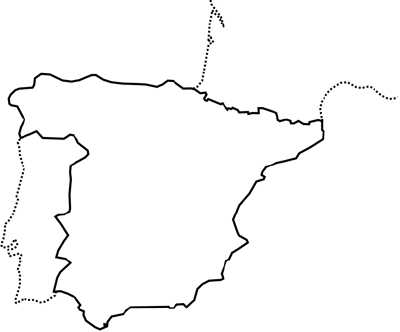 We will now make the first bridge between these well-understood concepts and parts of first-order logic.

In first-order logic we would say:

In first-order logic one would say:

"Is the capital of"     is a predicate constant.

Having established the bridge, we now give a concept definition of a ground fact in SBVR:

"Paris is the capital of France" is an example of a ground fact in SBVR.

"Brussels is the capital of Belgium" is another example.

An individual constant in first-order logic is a reference to an object that has no grammatical function, i.e., is not part of the domain-specific nor generic conceptual schema.  Examples:  "Paris", "Brussels", "France", "Belgium".  Conversely, "city", "country", "fact type", "role" are not examples of an individual constant.

A predicate constant in first-order logic corresponds to a verb in natural language with a fixed number of roles.  Examples: "is the capital of", "is born in", "works for", "likes".

Having described ground facts we will now proceed to define a domain-specific fact type of SBVR.

At the domain-specific conceptual schema level, the basis of SBVR consists of concept definitions and fact types.[7]  "An important asset of business rules is that they are based on clear terms and facts."[10]  In this article we will concentrate on the fact types and will discuss concept definitions in a future article.

Let us repeat the two binary ground facts (i.e., facts with two variable positions) and represent them in a way that clearly shows the variable and constant parts in the facts.

In Figure 7 we use a well-known representation technique[4] for illustration purposes to represent the ground facts discussed above.  Please note that we have classified elements (or objects) into 4 classes:  "city", "city name", "country", and "country name".  There are furthermore 3 classes of ground facts.  The first and third classes contain non-lexical objects (the things themselves), and the second and fourth classes contain lexical objects.  Remember that we need a reference or name to an element or object to have it represented in a ground fact.  Hence line 5 – a specific city is the capital of a specific country – can only be used as a ground fact if the two non-lexical elements are replaced by their linguistic representations.

city is the capital of country 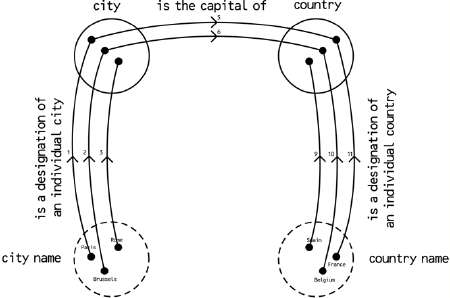 Figure 7.  The world of things and designations

The combination of connection 1, 5, and 11 represents the ground fact:

The city with city name Paris is the capital of the country with country name France.

Of course many people prefer to abbreviate this fact to:

The city Paris is the capital of country France,

Paris is the capital of France.

In SBVR:  city is the capital of country

The linguistic representations or naming conventions (e.g., between "city name" and "city" as well as between "country name" and "country") can fruitfully be considered as unary fact types, as will be further illustrated in the next paragraph.  Hence instead of using the binary SBVR fact type for the naming convention we recommend to apply a formal transformation and use a unary fact type.

Hence instead of the binary fact type in SBVR

I recommend a formal transformation with the following result, but first a few concrete ground facts

with the unary fact type

city name is a designation of an individual city

Figure 8. The world of things and designations in CogNIAM

The unary fact type will be described in the next paragraph.

However, extensive experience with fact orientation in business practice has demonstrated that it is much more understandable to transform each naming convention binary into a unary as specified below:

The "a" and "b" at the end of both fact types can be transformed into an element of the constant part as is given below:

In first-order logic we have in this case a set of individual constants.  Suppose we want to represent this set in a figure  -- we get the following:

Please note that traditional first-order logic puts all constants into one big container or class.  Such a class needs a very generic name, e.g., "individual constant".  In business, of course, we categorize this class into more meaningful classes such as "city name" and "country name".

This can be represented in a CogNIAM diagram as shown in Figure 10.

If we now connect this to the diagrams developed before, we obtain: 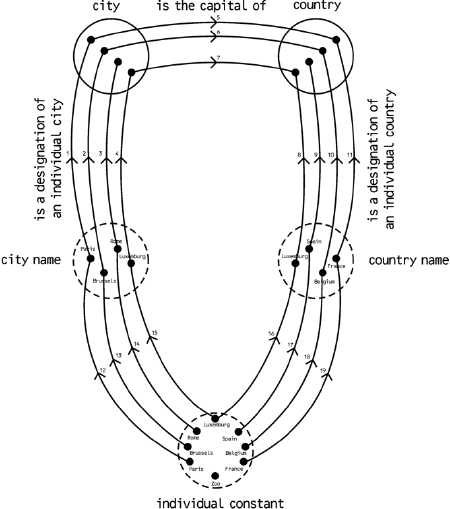 The corresponding CogNIAM diagram is given in Figure 12. 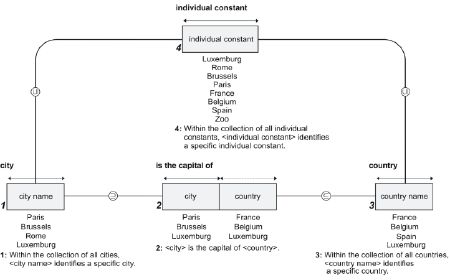 We recommend using a controlled natural language based approach in order to accomplish this.  Due to extensive experience with fact orientation in various business environments, we further recommend to formulate naming convention binaries, as is done in SBVR-SE, into unaries.  It was argued that naming convention binaries can be considered as unaries and therefore a formal transformation and the use of the unary is recommended.

I would like to take the opportunity to gracefully thank Terry Halpin, Ron Ross, and John Sowa for their valued comments on earlier versions of this article.