Which is More Important, Process or Rules? (Can They Be Separated?)

Summary: There have been numerous discussions about which is more important, process or rules. Organizations will allocate money and resources to projects to improve process or to develop business rules, but only rarely do we find an organization with enough knowledge of the two areas to understand that one cannot be accomplished without the other. This month, Kathy Long shares two real-world stories that illustrate why rules and process really do need to be considered as part of one concept.

There have been numerous discussions about which is more important, process or rules.  Organizations will allocate money and resources to projects to improve process or to develop business rules, but only rarely do we find an organization with enough knowledge of the two areas to understand that one cannot be accomplished without the other.  Nor can systems be developed, modified, or selected effectively without both.  The critical success factor is to educate the decision makers so that money is not wasted on efforts that will never produce the optimum level of results.

Just recently one of our neighbors moved into a new house.  He invited us up to see the house and have dinner.  During the "house tour" I noticed a door leading to another room in his "walk-out basement."  He laughed and said that was the door to his garage.  I was really confused because when we arrived at his house I noticed a very nice "detached" garage about 50 yards from his house on his driveway.  So, naturally, when he said it was a door to his garage I was somewhat puzzled.

But he opened the door and sure enough there it was, a one-car garage complete with garage door.  Then he took us outside to see his "garage" from the outside.  The pictures below are from the front of his house, showing his garage.  You may notice the very high wall in front of the garage, making it impossible to actually use the garage as a garage unless you used a crane to lift the car up about 8-10 feet off the ground so that you could drive it into the garage.  When I saw this I couldn't help thinking, WHY?  So, I asked, why do you have a garage that you can't use?

His answer was very simple and straightforward.  In this particular housing development, all of the original houses had been built from a specific set of house plans, all of which included a garage as part of the house.  In most cases this would make perfect sense — in order to keep the costs down on building these houses, the developer had a rule that prohibited the builder from changing the house plans, even though the houses were built in the mountains, on land that is not level and sometimes has a significant elevation change.  So, because of a 'rule' my friend has a garage on his house that's completely inaccessible by any type of normal motorized vehicle.

What I found even more interesting was the fact that even though it's obvious this room could never be used as a garage for an automobile, it had a regular working garage door.  The result is not only a house that looks odd because it has a garage 8-10 feet above the ground, but it also creates problems for the homeowner who might want to do something useful with the space.  Because of the garage door, the room is insulated on only three sides.  So, the homeowner has a room with insulation on only three sides in a house at about 10,000 feet elevation where it gets REALLY cold in the winter.  This would've been so easy to fix when the house was built and it probably would've even made the house cheaper to build by putting a wall in where there is a door.  However, the process and the rules were not considered together but, instead, as separate elements of the project.  The developer was concerned about the rules and cutting costs.  The builder was concerned with implementing 'the plan' and with getting the house built on time. 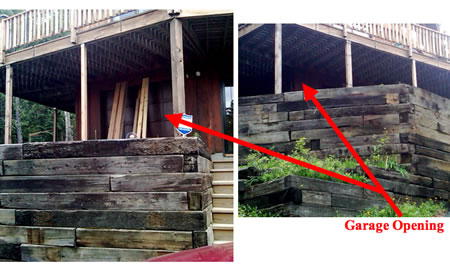 Every day we all encounter rules like this.  In most cases we just laugh (or sigh), but we don't normally try to change them.  In some circumstances, they are so ridiculous it's difficult to believe they're real.

A few years ago we received our tax statement from the county.  There was a housing boom at the time and the county decided to raise the value of our house by more than 30%.  The result, of course, was that our taxes also increased by 30%.  We decided to confront the county with the validity of this adjustment.

Our county, like most of yours, has a "process" that tax payers can go through to contest changes in the assessed values of their houses.  To make a very long story short, at the end of this process the value of our house was not changed, even though we presented the same number of "comparable" houses with much lower values than those used by the county.  The county would not adjust the value of our house based on our list of "comparable" house values.  When we questioned the county on why their list was better than ours, we were told, "it just was."  So, it never really mattered what we gave the county, they had a rule that said they would use their list of "comparable" house values whether it was accurate or not.

Two things about this were frustrating.  One was the fact that nowhere in the process was this "rule" explained to us.  So, we went before numerous boards and assessors (etc.), taking up our time and theirs when they knew all the time they were never going to adjust the value.  The second was the very existence of a process for something that, at the end of it all, was just an exercise in futility — it used up the county employees' time in a very non-productive manner.  The amount of time they spent with this process was completely non-value added, and it affected many of their other job functions, which were, in fact, value added.

The problem is that no one has ever realized that if there is a "rule" that makes a process non-value added then either the rule or the process should be changed.  If we had known the rules that went with the process we could have avoided the process completely.

In every organization, it's very important to examine the process and the rules as one project.  One cannot be fixed without the other, or one will cause problems for the other.  It doesn't matter what the directive is for the organization.  Process cannot be optimized without changing the rules, and rules cannot be changed without affecting the process.  All that organizations accomplish when these are set up as separate projects is a lot of redundant effort — and many times a less efficient and effective process than they had when they started.  If systems work is tied to these projects, the organization will also have less efficient and effective systems, or create redundant work trying to synchronize the two aspects of how the business works.

Remember, even though process and rules are still discussed as separate topics by most people, they are really part of one concept that makes organizations successful.  They should not be viewed, analyzed, or changed separately but as part of the whole group of elements that make an organization successful.