About this series of articles

While my first series of articles on writing natural language rule statements[1] explored a wide variety of issues in a rather organic and hence random manner, this series takes a more holistic and systematic approach and draws on insights gained while writing my recently-published book on the same topic.[2]  Rule statements recommended in these articles are intended to comply with the Object Management Group's Semantics of Business Vocabulary and Business Rules (SBVR) version 1.0.[3]

The story so far

In previous articles in this series (see the "Language Archives" sidebar) we have looked at standardised rule statements for various types of data rule,[4] which fall into three broad categories:

For the next few articles, we will be looking at rules that govern business processes and other activities.

What is a business process?

A business process (commonly referred to as just "a process") is an activity (or set of activities) that is managed by an organisation to produce some outcome of value to that organisation, its customers, its suppliers, and/or its partners.

A process may be performed by a system without human intervention, e.g., account housekeeping performed at the end of each financial period, or the automatic reordering of any stores item that falls below a reorder point.  Alternatively, a process may be performed by a human being without any automated system support, e.g., the delivery of goods by a driver from a supplier's warehouse to a customer's premises, a storeman's counting of stores items during stocktaking.  Many processes involve a collaboration between one or more human beings and one or more automated devices or systems, e.g.,

The majority of these interactions require that one of the human beings involved uses a form displayed on a computer monitor (an on-screen form), but this is not essential.  For example:

Each of the last three examples is governed by go/no-go rules:  the door or barrier is only opened if the information provided complies with the rules governing the access control device.

Characteristics of a process

All the examples above illustrate further characteristics of processes: 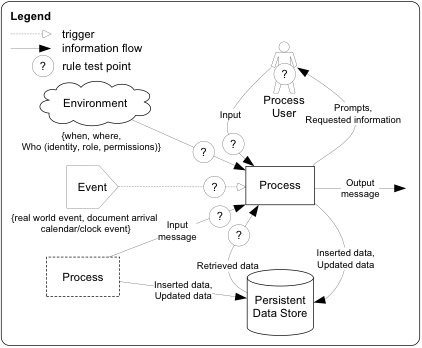 Rules govern processes in various ways, as illustrated in Figure 1:

The rules that govern processes can be categorised as follows:

Of course, the capture and update of data are processes.  Data cardinality rules and data content rules prohibit the acceptance of data if it is incomplete or incorrect or if it includes spurious data.  Similarly, data update rules restrict the situations in which data can be updated.  There are however many other processes in addition to capturing and updating data.

Organisations also generally need to place restrictions on (or prohibit) activities other than processes, such as illegal or unsafe activities.  For example, rules may be required to restrict when and where an activity may occur, e.g., an airline passenger must not operate any electronic device after pushback from the gate until the seatbelt signs have been switched off, nor during descent and landing.  Other rules may be required to completely prohibit an activity, e.g., an employee must not engage in insider trading.

These are often overlooked by business rules projects, since they are rarely amenable to automation.  If the purpose of a business rules project is to catalogue only those rules that can be automated, such omission is justified, but if the project purpose is to catalogue all rules that govern an organisation or some functional area thereof, these rules should either be included or explicitly stated as being out of scope.

For this reason I call these rules activity rules rather than process rules.

Rules that restrict the situations in which a process or other activity can occur (activity restriction rules) include:

in addition, a passenger may board an international flight only if that passenger:

Less satisfactory are those that merely require an activity to occur as soon as practical after a particular event:  the possibility of such rules cannot be entirely ruled out.

Process decision rules determine what action a process is to take in specific situations, e.g.,

Examples of other activity rules

An activity obligation rule requires a process or other activity to occur either within a maximum time after a particular event (such as the completion of some other process) or when particular conditions apply, e.g.,

A process decision rule determines what action a process or device is to take in specific situations, e.g.,

To be continued...
The next article in this series will discuss activity rules in more detail.

[3]  Semantics of Business Vocabulary and Business Rules (SBVR), v1.0.  Object Management Group (Jan.  2008).  Available at http://www.omg.org/spec/SBVR/1.0/
The font and colour conventions used in these rule statements reflect those in the SBVR, namely underlined teal for terms, italic blue for verb phrases, orange for keywords, and double-underlined green for names and other literals.  Note that, for clarity, these conventions are not used for rule statements that exhibit one or more non-recommended characteristics.

[4]  A rule that constrains the data included in a transaction (a form or message) or a persistent data set (e.g., a database record).

[5]  Note that this rule statement is an alternative way of expressing the same rule as RS172.

[6]  'Pushback' is the reversal of an aircraft from the gate before taxying and takeoff.

[7]  It may not be obvious that this is an activity restriction rule, but it is a prohibition of any process that results in the deletion or destruction of the information in question.

Graham Witt has over 30 years of experience in assisting organisations to acquire relevant and effective IT solutions. NSW clients include the Department of Lands, Sydney Water, and WorkCover while Victorian clients include the Departments of Sustainability & Environment, Education & Early Childhood Development, and Human Services. Graham previously headed the information management and business rules practice in Ajilon's Sydney (Australia) office.

He is the co-author, with Graeme Simsion, of the widely-used textbook "Data Modeling Essentials" and is the author of the newly published book, "Writing Effective Business Rules" (published by Elsevier). Graham has presented at conferences in Australia, the US, the UK, and France. Contact him at gwitt@pacific.net.au.

Read All Articles by Graham Witt