Summary: In September 2005, the Object Management Group (OMG) approved the 'Semantics of Business Vocabulary and Business Rules' (SBVR) to become a final adopted specification of the OMG. In this month's installment of 'SBVR Speaks (for Itself)' we continue our exploration of the SBVR with a look at how it supports the business rules approach.

The Semantics of Business Vocabulary and Business Rules (SBVR) provides a formal foundation for business rules.  It also defines what they are.  Much of the thinking in this area arose from the work of the Business Rules Group, which has been working exclusively in the area of business rules since the late 1980s.[3]

Key notions of the business rules approach are presented succinctly by the BRG's Business Rules Manifesto.  An extract from the Manifesto is presented below, to assist readers in positioning some of the central notions of SBVR.[4]  This brief extract is followed by a figure that gives an overview of SBVR support for key ideas of the business rules approach.  We conclude with an illustration of this support from SBVR.

as expressed in the Business Rules Manifesto

An Overview of SBVR Support for Key Business Rule Notions

A core idea of business rules formally supported by SBVR is the following from the Manifesto:

This core idea, originating in the BRG's seminal 1995 white paper,[5] has been called the Business Rules 'Mantra'.  It is often abbreviated for convenience to simply:

Figure 1 provides an overview of how SBVR supports the 'Mantra'.  It requires a separation of viewpoints as follows:

Business Rules 'Mantra'.  An approximation that simplifies explanation for business people and others new to the approach.

Representation (in SBVR terminology).  The SBVR notions that classify the words that people use to express their vocabulary+rules.

Meaning (in SBVR terminology).  The SBVR notions that classify the underlying meaning of the words that people use in expressing their vocabulary+rules. 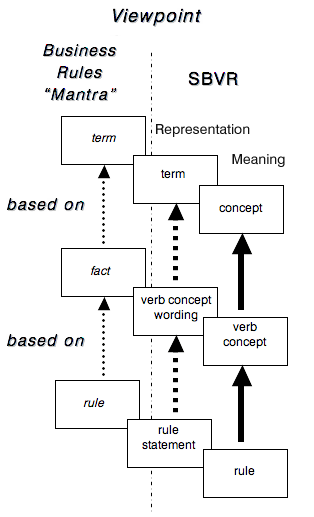 An Illustration of this Separation of Concerns

In support of the separation of concerns shown in Figure 1, SBVR distinguishes subject areas for:  the actual thing in the domain of interest, the meaning (concept) of that thing, the representation of the meaning by some form(s) of expression, and the raw expression.  The following descriptions are taken from the introduction to the SBVR Vocabulary.

Extension:  the things to which meanings refer, which can be anything (even expressions, representations and meanings when they are the subjects of our discourse).

Meaning:  what is meant by a word (a concept) or by a statement (a proposition) — how we think about things.

Expression:  things used to communicate (e.g., sounds, text, diagrams, gestures), but apart from their meaning — one expression can have many meanings.

Following are examples of how some things — like 'driver' (from the EU-Rent example) — cross through each subject area.

[3]  The Business Rules Group at www.BusinessRulesGroup.org

[4]  The Business Rules Group, Business Rules Manifesto ~ The Principles of Rule Independence ver. 1.2 (Jan. 8, 2003).  The full text can be found (in several languages) at BusinessRulesGroup.org