Summary: In September 2005, the Object Management Group (OMG) approved the 'Semantics of Business Vocabulary and Business Rules' (SBVR) to become a final adopted specification of the OMG. This month's instalment of 'SBVR Speaks (for Itself)' looks at the metamodel elements for the various ways to present a business definition.

Last time, we looked at some of the supplemental forms that can be used when defining business concepts in a business vocabulary.  In this instalment we turn our attention to the central form — a definition that expresses the concept meaning — according to the "Semantics of Business Vocabularies and Business Rules" (SBVR).  This part of the SBVR Vocabulary [3] provides concepts and terms for stating the definition of a vocabulary entry, using SBVR Structured English. 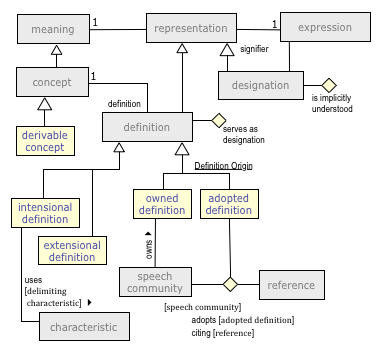 An intensional definition is a definition that describes the intension of a concept by stating the superordinate concept and the delimiting characteristics.

An extensional definition is a definition that is a description of a concept by enumerating all of its subordinate concepts under one criterion of subdivision.

An owned definition is a definition that a speech community 'owns' and is responsible for creating and maintaining.  For example, EU-Rent 'owns' its definition of the concept of barred driver.

An adopted definition is a definition that a speech community adopts from an external source by providing a reference to the definition.  For example, EU-Rent adopts definition 2b of 'law' from Merriam-Webster Unabridged, using the terms 'law' (primary) and 'statute' for the concept in the EU-Rent vocabulary.

Note that the primary term used for the concept does not have to be the same as the primary term in the source.  For example, EU-Rent has taken the definition of 'law' from MWU and might have preferred to use 'statute' as their primary term for this concept.

In addition to these two categorization schemes for definition, the following aspects involving 'definition' are worth noting:

In some (rare) cases, a concept has no term (or other designation[5]).  In such a case, the definition of the concept is used as the term for that concept.

It is possible for a term (or other designation) used by a speech community to have no explicit definition given.  This occurs when the term is generally understood by its owning community without needing to refer to a definition.

A derivable concept is a concept whose extension can be determined from its definition or from rules.

[5]  SBVR defines designation as a "representation of a concept by a sign which denotes it" which comes from ISO.  A term is the typical form of verbal designation, but there are also nonverbal designations, such as icons.