Summary: The relentless drive to reduce business timeframes is making for strange new bedfellows. You might feel data warehouse (DW) and business intelligence (BI) are far afield of business rules. You shouldn't. In this month's column, Ron Ross asks what good does it do to spend big bucks on improving the quality, timeliness and analysis of data if the resulting insights cannot be deployed quickly into the operational business? He provocatively concludes that your company should be spending at least as much on managing business rules as it currently does on DW/BI.

The relentless drive to reduce business timeframes is making for strange new bedfellows these days.  Every segment of IT feels the pressure, including data warehouse (DW) and business intelligence (BI).  Now you might feel DW and BI are far afield of business rules.  You shouldn't.

A current focus in DW/BI is on active or real-time data warehouses.  Different people have different interpretations, but all generally emphasize 'data freshness' or 'data latency'.  The thinking is that if you want more pay-back and direct use of the DW, the data it contains must be as up-to-date as possible, even up to the minute.  However, as Richard Hackathorn points out in a recent article,[1] the problem is that "managers continue to struggle with the issue of how lower data latency can be of value to the business."

Hackathorn discusses a very useful tool to explore this.  He points out that the business value you derive from the data in a DW/BI context is a function of the elapsed time between some business event occurring (in the real world) and some related business action being taken as a result (also in the real world).  As illustrated in Figure 1, there are three milestones within that elapsed time period:  data ready for analysis, information delivered, and action taken. 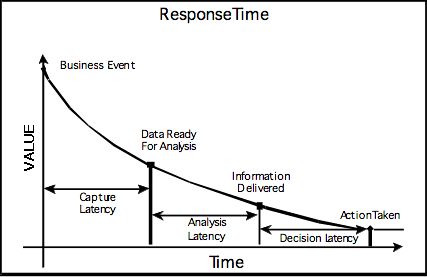 There are three corresponding kinds of latency, as follows:

First, the action to be taken should not be something trivial -- for example, merely reporting the results of the consolidation and analysis.  Such focus brings us right back to the problem of trying to assess the value of the data itself.  That's a solution in search of a problem.  Rather, the focus needs to be on some better-informed decision you make as a result.  As Neil Raden and James Taylor put it, "Making information more readily available is important, but making better decisions based on information is what pays the bills."[2]

Second, if this decision is truly operational it's not something you do infrequently or only once -- it's something that probably needs doing hundreds or thousands of times a day.  As discussed in my September column,[3] meaningful analysis of ROI requires staying focused on the volume of the decision -- not the kind of decision per se.  For example, the decision might have to do with cross-sell or up-sell opportunities, or proactive problem resolution, or optimal pricing for a given type of business transaction ... or a million other things your business does daily hundreds or thousands of times.

So the fundamental question is how well you deploy analytical insight from data you capture back into the business as operational decisions.  Here's where we hit the bad news.  Most organizations have no automated infrastructure to conduct such deployment in any high-volume, rapid, repeatable fashion.  You can spend all the money you want on improving the timeliness of data capture and analysis, but if the resulting insight has no quick operational deployment, what have you really gained?  That's like building near-real-time customer information for the Pony Express.  Hackathorn correctly writes, "… decision latency will increasingly become the limiting factor in improving response latency."

He also notes, "Decision latency … is driven primarily by the cultural aspects of how decisions are made in a company."  Human and organizational factors do indeed loom large in the way decisions are currently deployed in most organizations.  Specifically, insights arising through analysis of data generally go in one of either two directions for decision deployment, as follows.  Neither is effective by today's standards of scale and urgency.

Just because that's the way things are mostly done today doesn't mean it has to be that way.  Indeed, business rules and rule technologies offer a ready, proven solution to decision latency.  The potential business value is suggested in Figure 2. 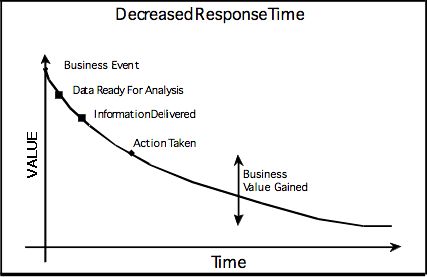 Ask yourself this.  How much does your organization currently spend on DW or BI?  Whatever the answer, I believe it should be spending at least that much on business rules.  In fact, given the current imbalance evident in so many organizations today, I'd say it should probably be spending even more!