SBVR Diagrams: A Response to an Invitation

Summary: The published SBVR Standard is presented in a language, SBVR Structured English. However, the Standard does not standardize this (or, indeed, any) language, and Structured English is just one of many possible notations that can be used. In this month's issue of the 'Semantics for Business', Sjir Nijssen and John Hall compare the strengths and weaknesses of two different SBVR notations, namely the text based Structured English notation and the CogNIAM diagrammatic notation.

In the April 2008 issue of the Business Rules Journal we can read:  "It has been said by different experts that "SBVR is a landmark result in the evolution of business rules and business modeling,"[5] "a major breakthrough in productivity in requirements and knowledge management,"[6] "SBVR provides the foundational bridge component that has been missing since computers began to be used in organizations in the 1950s,"[2]  "An important threshold … for our industry,"[8] and a "groundbreaking new standard."[1]  An SBVR-compliant language could be a controlled natural language.[9] [10]  In [3] Terry Halpin describes how the textual description for certain rules can be generated from the diagrams.

There is nevertheless a lot of work ahead of us before SBVR is in the proximity of becoming as common as using Word.  We have been giving intensive multi-day SBVR workshops, and in this column we will share with you the experiences of these workshops.  Persons attending the workshops almost without exception turn negative on SBVR when they start to read Clauses 8 through 12 of the specification.[7]  It subsequently takes enormous amounts of energy to demonstrate the many positive aspects of SBVR.  In this column we will describe SBVR in a way that is both tutorial and rigorous — both understandable and formal.  Wasn't that a major goal of SBVR in the first place?

"It should be remembered that SBVR Structured English (presented in Annex C) is just one of possibly many notations that can be used to express the SBVR Metamodel, and, as a notation, is nonnormative in the SBVR standard.  Indeed, additional compliant notations are welcomed and encouraged." (emphasis added by the authors).

There are indeed much better ways of describing the core aspects of SBVR.  We are happy to describe what we have experienced as the most productive in business practice, well-tested diagrammatic notation of SBVR.  It is our experience that consistent use of a diagrammatic framework helps people understand the total coherence and see the strong points of SBVR for practical applications.

In this paper the authors — who are fluent in various compliant SBVR notations — compare the strengths and weaknesses of two different SBVR notations, namely the text based Structured English notation and the CogNIAM diagrammatic notation.

As it is our experience that the productivity of communication about SBVR can be substantially increased by using concrete illustrations at the ground fact level, expressed in the preferred notation of the speech community, we do the same here.

Starting point is the use case text given below in Table 1:

Figure 1.  Ground facts represented in the preferred notation of the EU-Rent speech community

One of the sub-procedures in the CogNIAM procedure is to produce an effective legend as a binary.  The first part of each pair is some element of the representation in the preferred notation of the specific speech community; the second part is its verbalization as expressed in natural language facts.  Hence this can be considered as a prescription for how to specify a legend.  The legend for Figure 1 is given in Table 2.

Table 2.  Legend for the facts represented in Figure 2

The SBVR Structured English notation for this use case is presented below (in alphabetical order):

The following are terms for concepts used in SBVR Structured English definitions below that are taken to be understood, without explicit definition, as part of everyday language:

Note:  name and number are also used; they are defined within SBVR. 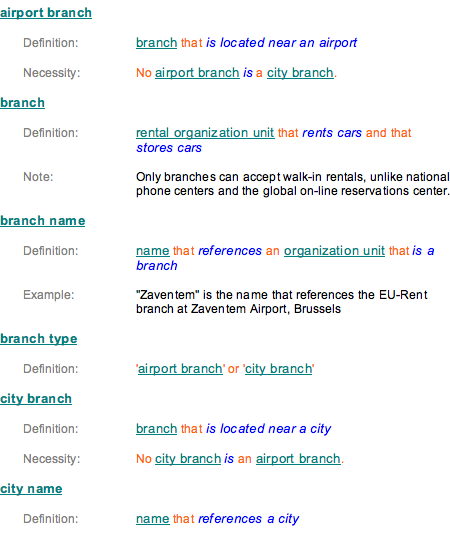 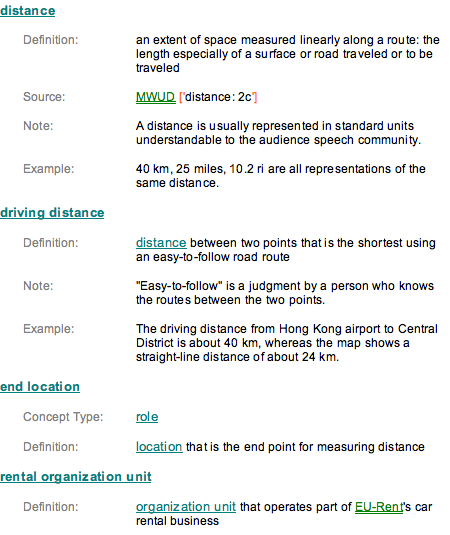 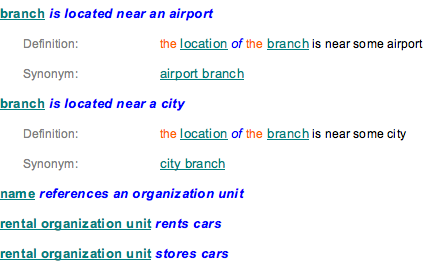 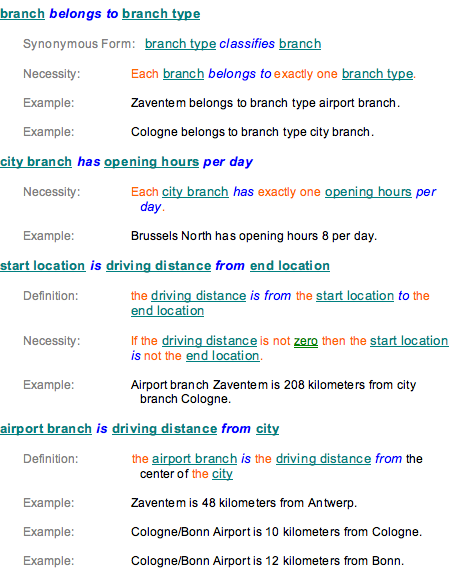 In Figure 2 the CogNIAM diagrammatic notation is given for the fact types, fact type forms, and rules.

Let us now compare these two SBVR compliant notations.  Let us discuss a concrete example.  In Figure 2 we can immediately see that role 'start location' of the fact type with fact type code DIST is involved in the following 4 rules:

Hence we see that all rules pertaining to a given role are presented in one position.

PNA Group had a team of very experienced analysts go through Clauses 8 through 12.  It was their estimate that the time they had to invest to go through the text jungle was many times more than the time they would have needed if for Clauses 8 through 12 the above described compliant diagrammatic notation had been provided as a service to the SBVR tool developers' and training developers' community.  They believe that it would have cost them less than 20 percent of the time actually taken, had they been given the compliant diagrammatic notation.  If that were extrapolated to all other uses of SBVR sizable profits could be realized.

The high productivity of the diagrammatic notation can only be achieved after learning the meaning of the "traffic signs" of this notation.  For somebody who understands the core concepts of SBVR or the core concepts of fact orientation this is an investment of less than one hour.  The subsequent return on that investment is very high if used in business practice, as second nature when analyzing a situation or preparing for or performing business communication.

The diagrammatic notation is a much better notation for the combination of fact types, fact type forms, and rules.  In the diagram all these aspects are clearly related.  Furthermore, in the associated alphabetically ordered concept descriptions, it is fairly easy to look up a concept definition.

It was PNA Group's experience that it took several fact-modeling experts many hours to completely analyze Clauses 8 through 12.  Had this knowledge been available in the diagrammatic notation discussed in this paper with the associated list of concept definitions, it is estimated that the investment to check the consistency and completeness of Clauses 8 through 12 would have been less than 20% of what it actually was, due to the low productivity of text.  This advantage is of course relevant for all knowledge described in SBVR.

Another advantage of the diagrammatic notation is that structural rules that "restrict" a given role are represented with that role.  In SE it is possible to do this by including 'necessity' clauses in concept definitions.  However, it is also possible to define free-standing structural rules that affect a concept, so there is a need to scan all of the textual notation to ensure that a concept is fully understood.  The diagrammatic notation can support a significant productivity gain compared with SE.

Another advantage of the diagrammatic representation is that obviously missing rules of necessity can easily be detected.  E.g., a missing primary uniqueness is spotted immediately.

Another advantage of the CogNIAM diagrammatic notation of SBVR can easily be seen from the following example taken from [4].

can be expressed in many language, notation, and speech community combinations:

All these fact type forms associated with the fact type shown above can be coherently expressed in one CogNIAM diagrammatic notation as follows:

In the SBVR 1.0 specification the invitation is given to develop SBVR compliant languages.  We believe there is room for at least two classes of languages, text based and diagrammatic.  Each has its specific purpose.  In this article we have compared two compliant languages.  For certain people text is better; others will prefer the diagrammatic language.  SBVR gives the freedom to choose — including both at the same time.

John Hall serves as the Business Rule Community's own Technology Review Editor.  Mr. Hall is also a principal of Model Systems, a consulting company with offices in London, England and Seattle, WA.  He has more than 30 years' IS experience, predominantly in database systems, architecture and methodology, and, more recently, in Web applications and e-commerce.  He is currently dividing his time between a major credit card company and
a European airline.

Read All Articles by John Hall