The Liberty of Rules

Summary: This column is inspired by the fact that the company named 'LibRT' celebrated its 10th anniversary in September 2008. In this month's issue of the 'Rule Observatory', Silvie Spreeuwenberg explains how rules — rather having than the typical connotation of restriction and suppression — can be seen as actually creating more freedom, i.e., 'liberty'!

Rules are not immediately associated with liberty.  Instead they are thought of as a way to restrict or suppress us; they have a negative connotation.  Dealing with rules for more than 10 years now, I never had the feeling that we were trying to restrict and suppress.  To the contrary, I always had the feeling that I was creating more freedom!  In trying to explain this paradox, I gave the relationship between liberty and rules a second thought. 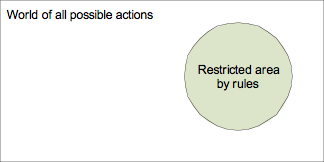 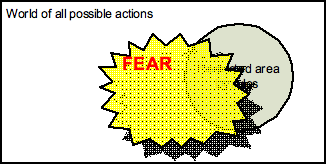 Now suppose that we create a rule that takes away the 'fear' that restricted the set of possible actions.  The result is that the introduction of the rule now creates more actions, thus more freedom. 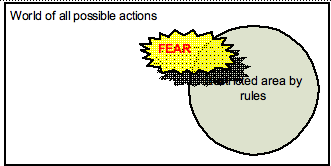 The rule that "it is forbidden to kill a fellow human being" is an example of a rule that creates freedom for many people by taking away fear for other people's behaviour.

This observation of how rules can create more freedom actually comes much closer to what I experience in helping organizations to organize their rules.  Inconsistent, incomplete, and vague rules create a chaos in organizations and distrust by the customers of those organizations.  Chaos and distrust result in fear that actually restricts the behavior of people.  By organizing the rules — perhaps creating new rules — and expressing them right, this restriction is taken away, resulting in more freedom.