Five Tests for What Is a Business Rule?

Summary: For business analysts, understanding decision logic from the perspective of business people is key. For that you need business rules. But when can a rule be considered a business rule, and when not? In this month's column, Ron Ross presents five pragmatic tests for knowing when you have identified a true business rule.

Consider the rule:  A log-in must be cancelled if the user enters the wrong password more than 5 times.  Business rule?

The tests for distinguishing business rules from system or IT rules are straightforward.[1]  There are five basic tests.  A rule must pass all five tests before it can be considered a true business rule.  The first three tests are as follows.

Test 2.  The rule must be about the business, not about either a system that supports the business, or a platform used to implement such a system.  A rule of thumb is this:  If you threw away the system — any system, even pencil and paper — would the rule still be important in running the business?  Business people should be managing business things, not system things.

Test 3.  The rule must be expressed in the language of the business, not in the language of either a system or a platform.  A business person must be able to understand a statement or representation of a business rule without significant training or experience in IT or IT-built systems.  Business people should be communicating in business terms, not system terms.

Now back to the original rule:  A log-in must be cancelled if the user enters the wrong password more than 5 times.  This rule satisfies tests 1 and 3, but not 2.  Not a business rule.

How about this example:  No cash, no order.  This rule does satisfy all three tests.  So, yes, business rule.

Does this clear distinction between business rules and system or platform rules ever break down?  One commonly-cited example where the line might blur is with security rules.  However, such rules often pertain directly to a system or the data in it.  Consider this example:  A person logged on to the system as a junior adjudicator may request customer data from the customer database only from the local server.  This rule satisfies test 1 above — it's practicable — but not 2 and maybe not 3.  So, not a business rule.  Does that mean the rule is any less important to the business?  No.  It's a rule all right, simply not a business rule.

Consider another example:  A junior adjudicator may be informed only about customers in his local district.  Throw out the systems, you still need the rule.  So, yes, business rule.

Two additional tests for when a rule can be considered a business rule are as follows.

Consider the statement:  A bank account may be held by a person of any age.  Although the statement certainly gives business guidance, it does not directly:

Because the statement removes no degree of freedom, it does not express a business rule.  Rather, it expresses something that is a non-rule — a.k.a. an advice.

Is it important then to write the advice down (i.e., capture and manage it)?  Maybe.  Suppose the statement reflects the final resolution of a long-standing debate in the company about how old a person must be to hold a bank account.  Some say 21, others 18, some 12, and some say there should be no age restriction at all.  Finally the issue is resolved in favor of no age restriction.  It's definitely worth writing that down!

In that case, you should write the business rule down — not the advice — because only the business rule actually removes any degree of freedom.  Just because the advice says an order $1,000 or less may be accepted on credit without a credit check, that does not necessarily mean an order over $1,000 must not.  A statement of advice only says just what it says.

Figure 1 presents an overall categorization of guidance from the perspective of business people.[3]  All rules are either behavioral (also called operative) or definitional (also called structural).[4] 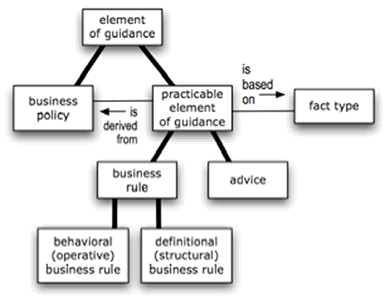 More About Business Rules Being Practicable

[2]  This sample business rule and certain others in this discussion are not well expressed.  They help illustrate the five tests, not explain how best to express the rules.  For guidelines about that refer to www.RuleSpeak.com.

[3]  This discussion of business rules is based on, and consistent with, the OMG 2007 standard Semantics of Business Vocabulary and Business Rules (SBVR).  For more about SBVR, see SBVR Insider on www.BRCommunity.com.