Summary: Managing any project effectively requires clearly defined scope. Projects involving decision analysis are no different in that regard. For decision analysis, scope is always ultimately based on cases. A case that is not in scope must be handed off (to some expert, manager, process, or other decision logic) or resolution. As Ron Ross explains in this concluding part of a three-part series, scope for decision analysis is based on three essential elements. It can also lead to discovery of independent sub-decisions, an important means to address complexity in decision analysis.

Managing any project effectively requires clearly defined scope.  Projects involving decision analysis are no different in that regard.

Scope for decision analysis is based on three essential elements:

The first two elements are highly intertwined.  For example, the question for some decision logic might be expressed in either of the following two ways:

(a)  Is an applicant eligible for auto insurance?

(b)  Is an applicant eligible for insurance?

The resulting scope is the same for either form of specification.

Refinements to scope mean adding additional limitations that narrow the range of cases the decision logic handles (i.e., should give definite outcomes for).  For example, the scope of the decision logic above might be further refined in either of the following ways:

(a)  Is an applicant eligible for auto insurance for USA under $1 million?

(b)  Is an applicant eligible for insurance?

Two more limitations, USA and under $1 million, have been added to both expressions above.  An implicit AND is understood to exist among all three scope items in each expression.  (If there is any doubt about the intended ANDing it should be given explicitly.) As before, both forms of specification result in exactly the same scope.

As scope is increasingly refined, listing limitations on scope separately — as in (b) — usually proves more effective, especially if the vocabulary used in the expressions is coordinated with a fact model (structured business vocabulary) — strongly recommended.  For example:

Question:  Is an applicant eligible?

Cases in Scope:  Any application submitted by an applicant that:
•  is for the product 'auto insurance'
•  is for a policy covering the 'USA'
•  requests a coverage amount less than $1 million

The outcome for a case in scope is usually determined by a standard or typical set of considerations.  If not, then the case is an exceptional case, or simply an exception.

The relation of considerations to cases is generally class to instance.

For example, suppose state/province is a consideration for a decision.  Then the particular instances Texas and British Columbia are cases of that consideration for that decision.  As this example illustrates, a case considered by an operational business decision can be as simple as a single instance for just one of the decision's considerations.  Such a case is very general.

More often, cases addressed by an operational business decision represent combined instances of many or all of the decision's considerations.  Such a case is very specific.  For example, the following instances might combine to represent one specific case addressed by a decision:

Since criminal status and age respectively are not among the standard or typical considerations for the decision logic, these cases are deemed exceptions.

It is important to note that exceptions are in scope.  Definite outcomes are always given for exceptions, even if simply to deny (or accept) some result out-of-hand.

Typically at most 20% of all possible cases are exceptional.  If the percentage of exceptional cases exceeds 20% for some decision logic, the standard or typical considerations should be re-examined.

Cases that are not exceptional are considered standard.  A standard case is a case in scope that is:

To complete specification of scope for some decision logic, the business rules for handling exceptions must be given.  For example:[2]

Simplifying the Expression of Decision Logic for Standard Cases

In other words, specifications for the decision rules covering all non-exceptional cases within scope need consider only standard or typical considerations.  Circumstances pertaining to scope and exceptions do not have to be addressed explicitly in the decision logic for standard cases.  This simplification results no matter what form that decision logic takes (e.g., decision tables, business rule statements, or other).

Simplifying the Analysis of Decision Logic for Standard Cases

A key to simplifying the analysis of decision logic for standard cases is to divide and conquer.  Projects should be carved out that can be undertaken separately and, if resources permit, in parallel.  For example:  Suppose the considerations used to determine eligibility for auto insurance in the USA for well-heeled applicants are different from those for ordinary applicants in terms of income, employment, and experience.  If the two sets of considerations are non-overlapping, the decision logic for the two kinds of cases can be developed separately.

A good example of independent subdecisions is the launching of a space shuttle or manned rocket.  Before the ultimate decision Should the craft be launched?  is addressed, an entire checklist of subdecisions is addressed, each with its own set of considerations.  These subdecisions pertain to weather, fuel systems, communications, down-field recovery, etc.

The decision logic for the decision Is an applicant eligible for auto insurance for USA under $1 million?  might be analyzed as independent subdecisions.  If so, each of the following subdecisions would have its own unique set of considerations. 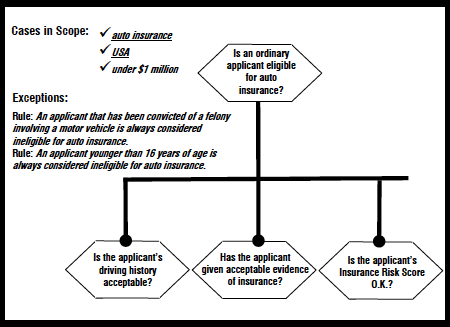 Figure 1.  Q-Chart for the decision Is an applicant eligible for auto insurance for USA under $1 million?

The decision logic for the overall decision can be portrayed as a Question Chart (Q-Chart for short) as in Figure 1.  This Q-Chart provides a visualization of a decision structure; that is, how some decisions are formally organized.  Q-Charting is an important and powerful new tool for business analysts.[3]