In DecisionSpeak, the structure of an operational business decision is diagrammed using a Question Chart (Q-Chart™ for short).  Q-Charts involve two fundamental elements:

The decision on the top (the upper decision) is always dependent on the decision below it.  If a Q-Chart shows multiple levels of decision dependency (not unusual), the same is true pair-wise at each level below.

As illustrated in the discussion that follows, every depiction of a dependency connection includes a 'hitch point' (a solid circle) at the bottom end.  The operational business decision on that end is always the one most able to stand on its own — i.e., the lower decision is always the more independent.

In other words, the dependent operational business decision can be preempted — indeed, made meaningless in certain cases.

In determining eligibility of applicants for auto insurance, for example, if an applicant is not eligible for coverage, there is no need to determine what to charge the applicant as a premium.  This relevance dependency between operational business decisions is illustrated in Figure 1 using a dashed connector (with hitch point at bottom).  The dashed line extends from the question area of the Q-COE representing the dependent (upper) decision. 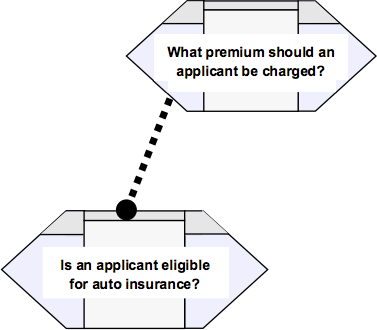 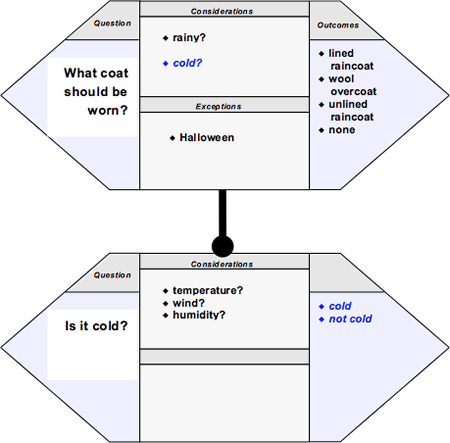 The consideration cold? in the dependent (upper) decision is conditional.  Whether or not it is cold depends on the three considerations of the lower decision:  temperature, wind, and humidity.

Figure 3 illustrates an outcome dependency using a dashed connector (with hitch point at bottom).  The dashed line extends from the outcome area of the Q-COE for the dependent (upper) decision. 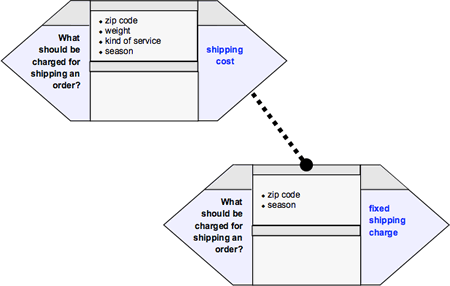 Relevance dependencies and outcome dependencies are alike in one important way — they both represent dependencies that can eliminate the need to ask the question for the upper (dependent) decision.  Because of this similarity, a dashed line is used to represent both.

Part 2 of this two-part series provides a comprehensive example of a Q-Chart, as well as an example of a hybrid diagram also showing derivation dependencies.