Summary: You should assume that the decision logic in your decision tables will change, often quite rapidly. That's a principal driver for externalizing the decision logic from processes in the first place. Unfortunately, coordination of integrity (correctness) for decision tables as their content is modified has been widely neglected in the field. Software vendors are notorious in that regard. That's odd since decision tables are all about business rules — ensuring correctness! What's needed is the ability to specify restrictions for decision tables from the business perspective to ensure their continuing integrity. As Ron Ross presents and illustrates in this month's feature, restrictions fall into three fundamental categories.

This business problem can be resolved only by knowledge workers and business analysts working under an appropriate methodology.

Potential anomalies can be controlled by careful design and, if available, appropriate software.

This third problem centers on decision table management, the focus of this discussion.

Table 1 lists the three fundamental kinds of restriction that can be placed on decision tables.  Each is discussed and illustrated below.

Table 1.  Kinds of Restriction in TableSpeak.

Literally, there is nothing else in decision tables to restrict.

As applied to a decision table a relevance restriction always either

These roles are individually discussed and illustrated below.

For example, suppose the business with the operational business decision What should be charged for shipping an order? in Figure 1 decides not to ship

For these particular cases:

Figure 1 shows the appropriate specifications for these restrictions. 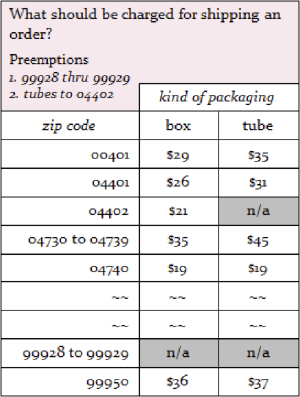 Figure 1.  Restriction for Preempted Cases by Zip Code and Kind of Packaging

If some change(s) to the preemptions and/or to any of the affected outcome(s) are subsequently desired, the restrictions provide a single point to coordinate (permit) change to the outcome(s).

As an additional example, suppose the business with the operational business decision What should be charged for shipping an order? in Figure 2 decides not to ship orders that weigh 100 kgs or more.  For these cases,

Figure 2 shows the appropriate specifications for this restriction. 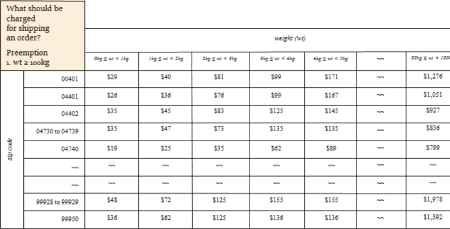 A relevance restriction that acts as a caveat is really just a weaker version of a preemption.  The decision logic basically says:  "Here's an outcome, but don't count on it being valid because the business question hasn't been asked properly."

In determining eligibility of applicants for auto insurance, if an applicant is not eligible for coverage, there is no need to determine what to charge the applicant as a premium.  This relevance dependency is illustrated in Figure 3 using a Q-Chart.[2] 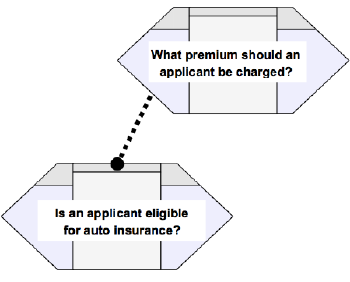 Must processes always address the questions involved in a relevance dependency in bottom-to-top sequence?  No.

For the questions in Figure 3, for example, a customer-friendly, web-based application might permit price-conscious consumers to ask about the premium before asking about eligibility.  Some precautions, however, should clearly be taken.  Any outcome produced in a price-before-eligibility sequence is not necessarily valid.

The solution is to specify a restriction that requires a caveat to be issued along with the premium.  The caveat, in the form of a message, is specified as part of the restriction.  The message for the example above might be worded:

Securing coverage at the given price subject to eligibility.

The restriction ensures a disclaimer is given by any process or use case that supports a price-before-eligibility sequence.

Are there ways in which considerations should not be combined?

A consideration restriction always constrains combination of elemental cases into intersection cases within a decision table.  The net effect is to prohibit certain intersection cases that would otherwise be possible.  Examples are provided in Figures 4 (only partially populated) and 5.

A part naturally cannot be substituted for itself.  Such combinations (intersection cells) are meaningless given the question the decision table addresses.

In Figure 4 a consideration restriction has been specified (at top) to preclude such possibility. 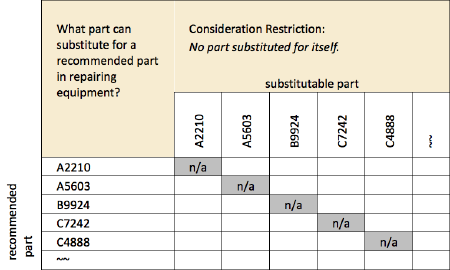 Figure 4.  Example of a Consideration Restriction Prohibiting Combinations of Self with Self 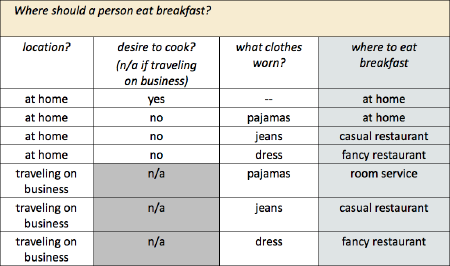 The intersection cases given by the bottom three rows are thereby constrained — combinations including yes and no for the desire to cook? consideration are not permitted.

Gray-out of intersection cells in Figure 5 indicates no revision (updating) is permitted for them (at least until the restriction is lifted, if ever).

Are certain cases limited to a particular outcome or to some subset of all potential outcomes?

Use of outcome restrictions for each of these roles is discussed and illustrated individually below.

Fixing the Outcome for Some Case(s)

To illustrate a fixed outcome, let's return to the operational business decision What should be charged for shipping an order? examined earlier.  Suppose the business wants to set a fixed price, $250, to ship orders that weigh less than 5 kgs to zip code 99950.  Figure 6 illustrates how the fixed price can be specified as an outcome restriction. 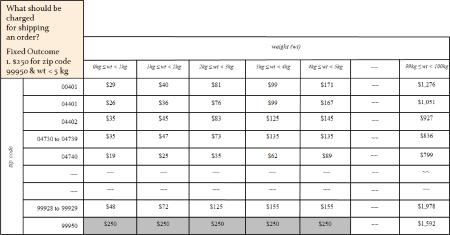 Narrow the Set of Possible Outcomes for Some Case(s)

Rather than fixing outcomes, an outcome restriction can also be used to narrow the set of permissible outcomes for some or all cases.  Figures 7, 8, and 9 illustrate.

In Figure 7 the outcome restriction $19 ≤ shipping charge < $2,000 is specified.  All intersection cases in the decision table consequently must fall into this range.  No modification (updating) of the table is allowed that would violate this restriction. 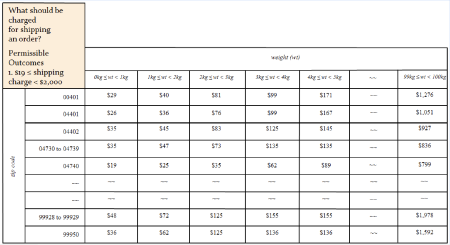 In Figure 8 the outcome restriction same form of exercise on Monday, Wednesday, and Friday depending on precipitation is specified.  No modification (updating) of the decision table is allowed that would violate this restriction. 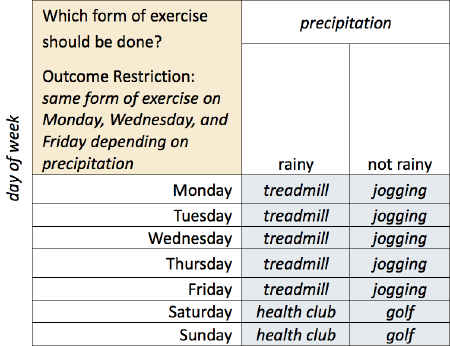 In Figure 9 the outcome restriction cals on Sunday ≤ cals on Saturday is specified.  No modification (updating) of the decision table is allowed that would violate this restriction. 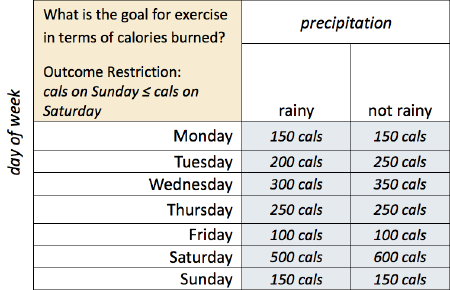