Summary: Version 1.0 of OMG's formal specification "Semantics of Business Vocabulary and Business Rules" (SBVR) appeared in January 2008. Since then, SBVR has been evolving: Version 1.1 was published in September 2013 and Version 1.2 in November 2013. How did it change from version to version? It's an interesting question, one that Rob van Haarst explores in this month's feature 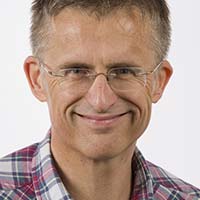 Version 1.0 of OMG's formal specification "Semantics of Business Vocabulary and Business Rules" (SBVR) appeared in January 2008.  SBVR has recently been evolving:  Version 1.1 was published in September 2013 and Version 1.2 in November 2013.

How did it change?  It's an interesting question, especially of course for those who have done work on the basis of the original SBVR 1.0 but have not found the time to dive into the more recent versions.  More generally, looking at changes in SBVR provides an insight into the concerns of the OMG committee responsible for the specification.

This article shows how SBVR changed by summarizing the conceptual changes in SBVR's key Clause 8, which covers its Meaning and Representation Vocabulary.[1]  According to this clause, business meaning is embodied in noun concepts, verb concepts, questions, and propositions.

In Clause 8, changes have occurred in three areas: 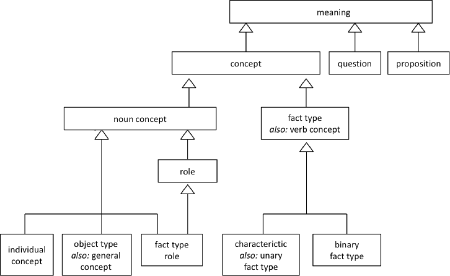 SBVR 1.1 contained the diagram fragment shown in Figure 2.  Changes relative to the previous version are in bold. 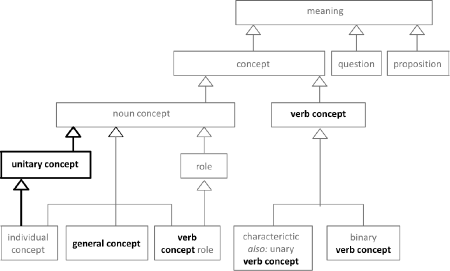 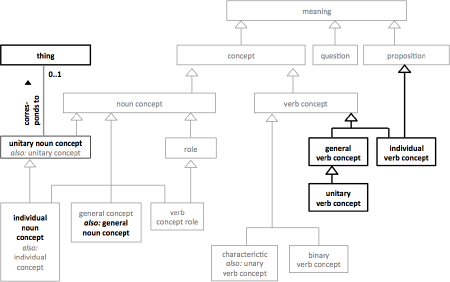 Somewhat confusingly, in 'SBVR-style' glossary documents since the original 1.0, it has been common practice to use the phrase "General Concept:" as a left-hand caption, indicating what is technically in SBVR the more general concept of the concept being described.  (This is also sometimes — but not in SBVR — referred to as the 'supertype'.)

This practice is also apparent in the SBVR specification itself, e.g.:

'Fact type' (and related concepts) was replaced with 'verb concept'

While this has largely been a rename operation, the definition of the concept has also shifted from each version to the next, as follows:

In SBVR 1.1, this model was refined by the introduction of unitary concept:

A note added to the 1.1 entry for individual concept helped make the difference:

In SBVR 1.2, the definition of 'unitary concept', and of its new synonym 'unitary noun concept', was revised to:

The synonym 'unitary noun concept' was called for because SBVR 1.2 extends the idea of 'unitariness' to verb concepts.  A unitary verb concept has exactly one instance in a given possible world at a given time.  As an example, SBVR 1.2 gives the verb concept 'the consolidated global account is filed in the base currency in the compliant format'.  What makes this concept unitary is that 'consolidated global account', 'base currency', and 'compliant format' each refer to only one object.  (As it happens, in this case, this is implied in the language form by the use of the definite article 'the' for each; a possible extension in one world of interest at one time could be 'the consolidated global account is filed in Swiss Francs in XBRL'.)

SBVR 1.2 introduces the Semiotic Triangle as an explanatory framework by inserting the picture "Relating Meaning to Extension" in subclause 8.6.1.  This picture shows a triangle formed by three basic noun concepts and the three verb concepts that connect them.  Figure 4 is a simplified version of this picture. 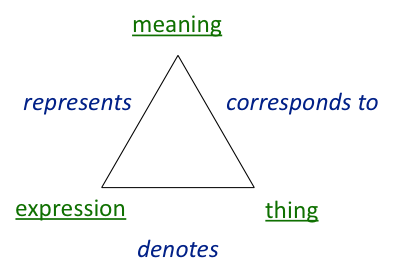 Here are the SBVR 1.2 definitions of the concepts depicted:

The verb concept expression denotes thing, while a basic concept in the Semiotic Triangle picture, is not formally declared in the SBVR metamodel.  In some places in the specification, the verb 'denote' is informally used to explain notions of representation (i.e., the expression–meaning relationship), as follows [emphasis added]:

In other places, 'denote' is used to explain notions of denotation (i.e., the expression–thing relationship), as follows [emphasis added]:

In this note, in terms of the Semiotic Triangle as well as in SBVR itself, 'representation' refers to an expression, 'proposition' to a meaning, and 'state of affairs' to a thing.

The Semiotic Triangle picture is presented in subclause 8.6.1, which is entitled "Relating Meaning to Extension."  This placement is somewhat arbitrary, even if the accompanying text does clearly state that 8.6.1 is about "one leg" of the triangle.  In reality, the Semiotic Triangle is an excellent mental map for grasping the whole of SBVR's Clause 8, that is, the SBVR metamodel on Meaning and Representation.

In Clause 8, the Meaning and Representation Vocabulary of OMG's SBVR specification, the following points summarize the main changes from SBVR 1.0 through SBVR 1.2:

[1]  This article is based on a detailed comparison of changes between the 1.0, 1.1, and 1.2 specifications of SBVR.  It is strictly limited to Clause 8.  If you are interested in revisions to other Clauses, note that OMG provides document versions with changebars.  These make it easier to compare versions.  You may also want to consider automating version comparison by feeding the XMI machine-consumable versions of the specification into a software tool.  However, making sense of the revisions and the multiple interdependencies between changing concepts remains a manual process.  I have tried to refrain from personal interpretation and commentary.  Inevitably, the act of summarizing this material implies some degree of interpretation.

All the quotations in this article are literal quotations from the official documents as published on the OMG website, including any color-coding of text.  In many cases, however, only a subset of the items in a glossary entry was quoted.  If a glossary entry in this article contains one "Definition:" and one "Note:" item, it is quite possible that in the SBVR specification it contains other items not quoted, with the same or different captions (Example, Source, General Concept, etc.).

[2]  Diagram fragments:  in spite of what 'fragment' suggests, I ended up copying the 8.1 diagrams almost in their entirety.  I omitted some details that I think distract from the discussion at hand, in particular, 'concept type' as a specialization of 'general concept'.  Again, whatever diagram fragments were copied in this article appear identically in the OMG documents.

[3]  The change is more subtle than summarized here.  SBVR 1.0 already mentioned 'verb concept' as a possible alternative for 'fact type'.  However, in 1.0, 'fact type' was the more common term and also the term used to derive other related concepts, like 'fact type form'.  'Fact type' is still a declared concept of the SBVR 1.2 metamodel, but it has been moved to Clause 10 (the part of the SBVR metamodel called Formal Logic and Mathematics Vocabulary) and thereby outside the scope of this article.  The section on Conceptual Models and Schemas was also moved from Clause 8 to Clause 10.

Rob van Haarst has a degree in General Linguistics and 20+ years experience in business modeling for software development, analyzing project requirements, creating or customizing the actual software, and building supporting tools. Serving clients as diverse as housing corporations, health insurers, air carriers, and government agencies, he has specialized in natural-language specifications and model-driven development. He is the author of the book SBVR Made Easy. Rob can be contacted at www.conceptualheaven.com.