Summary: In this article Markus Schacher describes how the OMG specification "Semantics of Business Vocabulary and Business Rules" (SBVR) has been pragmatically applied to develop another OMG specification, the "UML Testing Profile" (UTP). As a language to express business rules for business people, the business in this case is rather technical: it is the business of testing complex systems. Nevertheless, in the endeavor of developing UTP, SBVR has been used to define the semantics of the core "business concepts" of testing as well as some of the core "business rules" of this domain.

This article describes how the OMG specification "Semantics of Business Vocabulary and Business Rules" (SBVR) has been pragmatically applied to develop another OMG specification, the "UML Testing Profile" (UTP).  As a language to express business rules for business people, the business in this case is rather technical:  it is the business of testing complex systems.  Nevertheless, in the endeavor of developing UTP, SBVR has been used to define the semantics of the core "business concepts" of testing as well as some of the core "business rules" of this domain.

Back in 2005 the initial version of the UML Testing Profile (UTP) was published by the OMG (Object Management Group).  The motivation of the authors was to provide a standard language for designing, visualizing, specifying, analyzing, constructing, and documenting the artifacts of test systems.  As its name indicates, the UTP was designed as a UML profile (a customization mechanism of the UML [UML]) to provide a domain-specific language specifically designed to formalize artifacts typically required in the testing domain.

Although dedicated books such as [MBT] have been published, that version of UTP did not get widely known and used in practice since not many people understood what UTP really was about:  some people at the OMG even believed that the UTP was some kind of mechanism to test the UML.  Thus, in June 2010 the UTP 1.1 Revision Task Force (RTF) was chartered with the intention to improve the visibility and comprehensibility of the UTP and to adapt it to the latest development in the Model-based Testing domain.  Even at that time the group of UTP developers had the vision to develop a major revision (UTP2) by developing several intermediate minor revisions.  As a result of this, in June 2011 UTP 1.1 was released and, in August 2012, UTP 1.2.  In September 2012 a Request for Information (RFI) was issued to gather requirements from the industry on the forthcoming major revision UTP2.  An initial submission of the new UTP2 was submitted to the OMG in May 2014 and currently a 2nd revised submission is expected for the end of 2015.

As a response to this RFP, and after several iterations, in January 2008 the first version of "Semantics of Business Vocabulary and Business Rules" (SBVR) was published by the OMG.  Since then, SBVR has undergone several minor revisions of which the latest — SBVR 1.3 — was released in May 2015.  One outstanding feature of SBVR is that SBVR is specified in itself, i.e., the entire specification of SBVR is specified in SBVR.  Furthermore, SBVR supports different rule languages to represent SBVR rules, such as "SBVR Structured English" (SBVR-SE) and RuleSpeak® [RS].  Based on SBVR, in August 2013 a dedicated specification defining important cross-domain concepts and rules related to date and time [DTV] was published that supports complex temporal aspects of business rules including support for different calendars, time zones, etc.

One of the core artifacts of the UTP2 is the conceptual model that defines the semantics of important test concepts.  In 2013 the UTP2 working group decided to define this conceptual model as an SBVR model.  So, the task was to define the meaning of concepts such as:  "what is a test case?" "what is a stimulus?" and "what is a test requirement?"  However, we decided to apply SBVR in a rather pragmatic form and not to follow the specification in a word-by-word manner.

When defining a vocabulary as the foundation of a conceptual model, SBVR distinguishes two major types of concepts:

In SBVR, such concepts may be represented in textual form and/or in graphical form on so-called "Concept Diagrams."  Concept Diagrams resemble UML class diagrams but have some important differences:

The conceptual model of UTP2 has been structured into multiple vocabularies, each representing a sub-domain of testing such as "Test Cases," "Test Data," or "Test Configuration," etc. which we will largely ignore here.  To illustrate the use of SBVR in the development of UTP, we will focus on the UTP2 vocabulary "Test Actions" that defines the semantics of atomic actions (called "test actions" in UTP2) of a test specification.  Figure 1 is part of this vocabulary, and the Concept Diagram shown visualizes its core concepts. 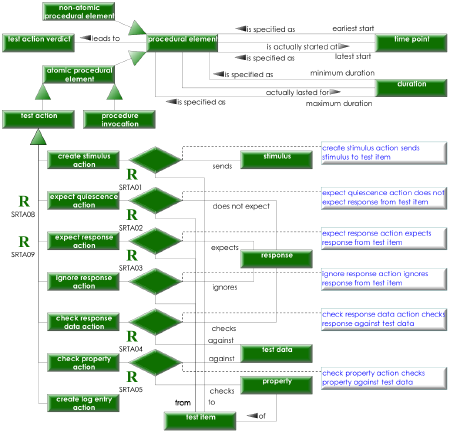 The numbers shown in parentheses in the above definition are just references to other definitions (e.g., "intension" is defined in section 3.2.9).  This form of definition has the advantage that it very concisely describes the essence of a concept.  However, it is usually not so easy to create such definitions (and it is even harder to find a consensus on those definitions).

Figure 2 lists the intensional definitions of some of the noun concepts shown in Figure 1.

Finally, the Concept Diagram in Figure 1 also includes two noun concepts adopted from the Date Time Vocabulary [DTV]:  the noun concepts "duration" and "time point."  By means of the verb concepts "is specified as" and "is actually started at" — as well as the roles "earliest start" and "latest start" of a "time point" — we may express that any "test action" must be executed within some timeframe.  This is where rules come into play.

SBVR distinguishes two main types of rules:  "definitional rules" (also called "structural rules") and "behavioral rules" (also called "operative rules").  Both types of rules are sentences formed from concepts defined in a vocabulary.  Definitional rules, as their name says, contribute to the semantics of concepts by expressing constraints on them:  what is possible, what is impossible, and what is necessary to have a consistent model.[2]  Figure 4 lists some examples of definitional rules related to the Concept Diagram shown in Figure 1.[3]

As mentioned above, in UTP2 every "test action" must be performed within a particular timeframe:  this is nothing else than an obligation on the testers.  This obligation may well be expressed by SBVR behavioral rules as shown in Figure 5.

In the context of UTP2, these behavioral rules are not really part of the UTP2 specification.  However, they influence or guide the behavior of a tester responsible for executing a test specification expressed in UTP2.  If she or he fails to meet these obligations, the result of the test will be undefined or even unusable.

Another important notion of SBVR that helps to find consensus on vocabularies is the notion of a "Community."  SBVR distinguishes two types of communities:

In the context of UTP2, "Testers" could be considered as a semantic community as they deal with a common set of concepts relevant in the testing domain.  However, since not all testers speak the same language, different speech communities must be distinguished as well.  The terminology used to express the UTP2 conceptual model has been defined by OMG's "UTP2" community, i.e., the people involved in the development of the UTP2 specification.  However, there are also other important testing communities such as the people behind the ISO or ETSI standards for testing (see [ISO3] and [ETSI]).  These communities utilize (at least partially) the same concepts but use, for some of those concepts, different terms.  The following table illustrates some of the differences and similarities in the terminology used by these communities:

The table shows some total agreement among those communities (e.g., term "test case"), some partial agreement (e.g., terms "test item" versus "system under test"), some total disagreement (e.g., terms "test case verdict," "test result," and "test verdict") as well as some homonyms that may cause confusion if members of different speech communities talk to each other (e.g., term "test procedure" that has a different meaning in the "UTP2 Testers" speech community than in the "ISO Testers" speech community).  It also shows that some of the terms seem not to have an equivalent underlying concept in some of the communities (e.g., "test procedure").

This article has shown how the semantics of the terms used in a particular business may be formalized by means of the "Semantics of Business Vocabulary and Business Rules" (SBVR) specification of the OMG.  Specifically, it has illustrated how SBVR has helped to formalize the core concepts of the "UML Testing Profile" (UTP) specification of the OMG that is the "business" of testers.  SBVR may not only be used to formalize the semantics of those concepts by intensional definitions, concept diagrams, and definitional rules, but can also guide the behavior of people acting in a particular business domain — in our example the testers — by means of behavioral rules.

[1]  You may wonder about the colors used in these definitions.  These are defined by a syntax called "SBVR Structured English" which is part of the SBVR specification and which defines styling conventions for different concept types.

[2]  By "model" I mean here any description of a concrete aspect of the world by utilizing the language defined by an SBVR vocabulary, i.e., the noun concepts and verb concepts of that vocabulary.

[3]  SBVR Structured English defines a set of keywords that are styled in red in formalized SBVR rules.

Markus Schacher (markus.schacher@knowgravity.com) is co-founder and KnowBody of KnowGravity Inc. (www.knowgravity.com), a small but smart consulting company based in Zurich, Switzerland, and specialized in model-based engineering. As a trainer, Markus ran the first public courses on UML in Switzerland back in early 1997, and as a consultant he helped many large projects introducing and applying model-based techniques. As an active member of the Object Management Group (OMG), Markus is involved in the development of various modeling languages such as the Business Motivation Model (BMM), the Semantics of Business Vocabulary and Business Rules (SBVR), and the UML Testing Profile (UTP). He is co-author of three books on business rules, SysML, and operational risk, as well as a frequent presenter in international conferences.

Read All Articles by Markus Schacher