Getting a Green Light with Business Rules and Connected Things

Summary: In this month's 'Rule Observatory', Silvie Spreeuwenberg shares some observations sparked by her recent realization that the Netherlands stands apart in its having traffic light rules that depend on a vehicle's presence — no waiting 3 minutes at a red light when the intersection is empty! Silvie explores two interesting aspects of this capability: How is it done? Why is it done? And what does this suggest for the future of intelligent control systems all over the world.

I have lived in the Netherlands all my life.  As a child I walked to school; as a mother I cycled to the nearby shop for my groceries; now I drive my car to France every year for a summer holiday, but I pass the traffic jam with my motor bike to be on time for business meetings.  This may already sound astonishing if you have not been raised (or lived) in the Netherlands.  However, this week I learned something more astonishing.  The Netherlands is the only country using traffic light rules that depend on a vehicle's presence — named in Dutch 'vehicle dependent control' (voertuig afhankelijke regeling), also known as 'dynamic traffic light control'.  In the Netherlands it's used on a large scale.

So as a road user I never wait at a red light if there is no intersecting traffic.  Yes, I have been frustrated when I was abroad — waiting 3 minutes for a red light while the intersection is empty.  What are we waiting for?  (I don't want to bother you with my thoughts at this point in time.)  Some may call me impatient.  Yes, I am.…

I'll start with the latter question since doing this is a lot of work and requires a lot of expertise.  Imagine an intersection with four roads.  The simple situation is an empty intersection with one vehicle wanting to cross the intersection.  It gets a green light.  But how about when we have 10 vehicles wanting to turn left and 2 vehicles on the opposing sides that want to go straight on.  How do you distribute the times the light is green?  And let's make it a little more complicated:  the road going straight on is the major road and has higher priority.  In the Netherlands we add one more layer of complexity:  the cyclists want to cross the intersection as well and may temporarily interrupt the green light for the vehicles.  And then we need to allow for the situation that an ambulance or public transport gets higher priority.  Now we have a fairly complex system — especially when multiple intersections are coordinated in a green wave.[1]

HOW did we solve this puzzle?  While you can buy a traffic light as a black box machine, we have demanded that the market open this black box so that it is programmable.  A traffic engineer may set values for up to a hundred parameters to adjust the static algorithm.  They do that based on local knowledge of the traffic situation.

Now this makes sense to me:  back in the seventies I had seen students counting vehicle passages for weeks while I was walking to school.  Statistics were needed to optimize the parameters.  Nowadays the traffic light is connected to sensors that detect vehicle presence.  The next innovation is the Internet of Things — the car is the sensor.  That is the future.

It is interesting that the Internet of Things will not decrease the complexity.  Rather, it asks for a new way to look at the intersection.  Which traffic will pass the intersection first?  The rules may be complex and dynamic:  pedestrians must get higher priority when school starts; traffic to the highway may get lower priority when there is congestion on the highway.  This calls for a new, intelligent control system based on business rules.

The remaining question is WHY we need this?  Of course, all road users across the globe have the same objective:  getting from A to B as safely and as quickly as possible.

When
• all road users have the same speed,
• the distance between the intersections is the same, and
• the traffic is evenly spread across this grid,
the solution can be a matter of calculations.

Now compare the maps of Amsterdam and New York (once called New Amsterdam).  They can't be more different.  New York City uses a grid plan while in Amsterdam you find circles and stars. 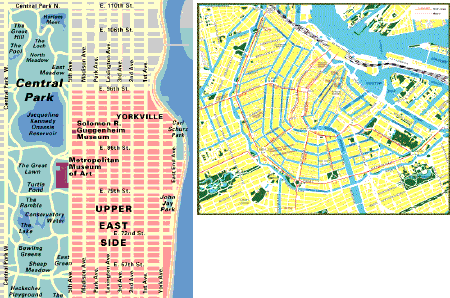 Combine this with the Dutch
• tendency for control,
• need for motivation to follow rules,
• expertise in logic and algorithms, and
• ability to pay.
I am still surprised that the Netherlands has created such an exceptional infrastructure.  Being a small country there was probably no choice.

But the future of connected cars delivering Big Data as part of the Internet of Things will call for intelligent control systems all over the world.  I hope that all road users will be informed by the business rules implemented by these systems such that they will know why they are waiting for that red light.  Let's make these systems intelligent and transparent — not only for traffic management, but for business management in general.

[1]  A green wave occurs when a series of traffic lights (usually three or more) are coordinated to allow continuous traffic flow over several intersections in one main direction.  See "Green Wave":  https://en.wikipedia.org/wiki/Green_wave