Conceptual Model vs. Concept Model: Not the Same!

Summary: What exactly is a conceptual model? And is it the same as a concept model? You would think they might be similar or even the same. Actually, they are quite different and serve very different purposes, as Ron Ross explains.

What exactly is a conceptual model? And is it the same as a concept model? You would think they might be similar or even the same. Actually, they are quite different and serve very different purposes.

A concept model, in contrast, is an aid in achieving precision in continuing discourse about some subject matter. It enables clear communication by allowing you to express statements (sentences) that can be readily understood and disambiguated (perhaps automatically). A concept model becomes ever more important the deeper you dig into the subject matter. It's not something you should ever 'file away'.

There are multiple forms of conceptual model, but there is one and only one form of concept model.

A conceptual model is often inherently graphical. A concept model, in contrast, is always semantic. You can certainly create a graphical guide to a concept model, but doing so is always a matter of convenience, not of necessity.

The target of a conceptual model frequently involves things in the real world. That target is often something you want to engineer, re-engineer, or perhaps reverse-engineer.

The target of a concept model, in contrast, is always what's in the mind, not directly about things in the real world. It's about how you understand things — that is, how you define your concepts. It is engineered based on the words needed to express those concepts. Its purpose is to help you communicate complex knowledge — in sentences.

Table 1 summarizes fundamental differences between a conceptual model and a concept model. 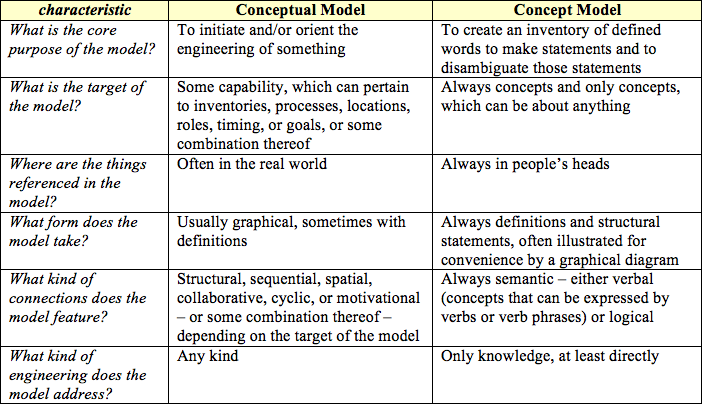 Case Study: Creation of a Conceptual Model vs. a Concept Model

Suppose the year is 1956. We decide we want to create a fast, multi-lane, non-stop highway between the cities of Los Angeles, CA and Jacksonville, FL. In other words, we want to create Interstate Highway 10 ('I-10'). A good place to start is to create a conceptual model.

So, a rough map is drawn up by hand (it's 1956!) showing the locations "Los Angeles, CA" and "Jacksonville, FL" connected by the new Interstate being conceived ("I-10", so labelled on the model).[1] Discourse about the new route is successfully initiated, and its engineering eventually moves on to the design and then the construction phases. The conceptual model is judged to have been a success.

In 1956 no repository is available other than file cabinets (which is probably where the sketch ends up). But let's suppose an automated platform were available to record the 'facts' represented in the conceptual model (not just the visualization itself). Those facts would be the start of a Business Knowledge-Base.[2] Here are the facts so far.[3]

Not much there! No concept model has been created. So far, there are no definitions for 'city', 'Interstate Highway', or 'links'.[4]

Now let's suppose we want to specify some business rules, as follows:[5]

The hand-drawn conceptual model could perhaps be updated with some new graphical features — for example, representing two-lane and three-lane highway segments, major cities, and rest stops. Or not. It's a judgment call about whether the updates would be useful for discourse at that stage (and in the future).

In order to communicate and understand the business rules precisely, however, each of the concepts needs to be defined and related as appropriate. In other words, you need to create a concept model.

So, work on a concept model is initiated and appropriate entries are created in the Business Knowledge-Base. Those entries would include the following (by no means complete):

This set of entries constitutes the initial concept model.

Suppose you wanted to engineer a database. Yes, you could start with a conceptual model to portray the essential things you ultimately want to keep data about. And yes, you could call it a conceptual data model.[6]

Here's a two-part test to determine whether your conceptual data-model can pass muster as a concept model.

Very few (actually none) of the conceptual data-models I've come across can pass these tests.

By the way, can a concept model be used to create a data model (to engineer a database)? Absolutely. In fact, I think you should use one. Literally, how could you keep data about something you can't talk about precisely?! That's a highway to nonsense!

A concept model serves as a lexicon[9] for expressing your inventory of thoughts about some subject matter. It gives you standard words to make unambiguous statements (write clear sentences[10]) to express those thoughts.

A concept model comprises a structured vocabulary with sufficient semantics to 'test' the precision and consistency of all statements written about the subject matter. The statements can be of arbitrary complexity. The concept model provides a basis for disambiguation — the discovery of disconnects in our mutual understanding. It literally ensures we are communicating — i.e., that our statements can be interpreted correctly (whether by people or machines).

A concept model is a foundation for clearly expressing knowledge.[11] And if you can express knowledge clearly, then you can capture and disambiguate it. That's something new — it's not something that's ever been done before in an engineered fashion.

[1] The names of the two cities and the link appear in quotation marks in this sentence because the icons and line on the sketch are not the real-world things, just representations of them.

[3] Facts always must be complete, unambiguous sentences (propositions) that are true.

[4] Personally, I wouldn't bother trying to define the real-world instances 'Los Angeles, CA', 'Jacksonville, FL', or 'I-10', but you could. In fact, it might be prudent. My concept of 'Los Angeles, CA' might be different from yours(!). For example, is it just the chartered city, or is it the whole metropolitan area including Santa Monica, CA (where I-10 actually starts)?

[5] I'm using business rules just as an example. They could be literally any business communications you'd like to express precisely.

[6] Personally, I wouldn't use that term because 'conceptual data' is just too confusing. It's an oxymoron. So, if you want to use the term, at least hyphenate it properly — conceptual data-model — as I do in the paragraphs that follow.

[7] You can start off modestly, of course.

[8] The meaning of 'concept model' in this discussion is from the OMG standard Semantics of Business Vocabulary and Business Rules (SBVR). For more information refer to http://www.brcommunity.com/standards.php.

[10] As used in this discussion statement always means one or more complete, meaningful sentences.

[11] What is the difference between knowledge and information? Here's my personal view. Let's suppose we updated the I-10 conceptual model to visually show two-lane vs. three-lane highway segments. I can look at the model and see that I-10 is at least 3 lanes everywhere within Los Angeles, CA and Jacksonville, FL. I'd call that information. What you don't know is whether an Interstate Highway is intended to be at least three lanes in every major city. Even if the map were complete, and the Interstate Highways were three lanes in every major city, could you be sure even then? No, it might be just a coincidence. To be sure I need the business rule. It gives more than just information; it communicates knowledge.