Summary: Certain elements of structure useful for concept modeling come as handy, pre-defined ("built-in") forms. In this second part of the series on ConceptSpeak™, Ron Ross illustrates four of these special-purpose elements of structure: categorization, property, composition, and classification. These standardized kinds of connection between noun concepts extend the reach and precision of the concept model significantly. They also allow statements to be written with great precision — for example, when expressing business rules.

To express a rich variety of business communications at scale (including but by no means limited to business rules) you need both nouns and verbs. When you compose the business' noun concepts and verb concepts as a coordinated set, the result is a structured business vocabulary (or concept model). A concept model diagram can be used to convey this vocabulary in a visual way that is easily understood by all stakeholders.

These special-purpose connections between noun concepts come in handy, pre-defined semantic constructs, as provided by ConceptSpeak™ (summarized in Table 1). Because they come as built-in patterns they are ready to use, thereby significantly extending the reach and precision of the concept model. And because they are standardized they bring deeper meaning to a set of concepts that can be reasoned over.

Before I get too deeply into this, however, I should give a quick note about the terms instance and property. 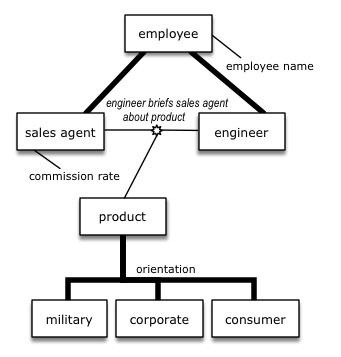 Figure 1. Categorization and resulting categories on a concept model diagram.

Any category can have categories; any category of a category can have categories, and so on. Multiple levels of categorization are not uncommon in concept models. Indeed, such refinement or narrowing of meaning as you go 'deeper' yields a high degree of precision or selectivity for making statements about the business. For example, a business rule might be expressed for software engineers, a potential category of engineer, which does not apply either to other kinds of engineers or to employees in general.

How is a categorization shown using a heavy dark line in a concept model diagram recorded in a glossary? No explicit entry need be made for this kind of standard relation. Rather, the concepts are carefully tied together by their meaning. For example [from OED] the definition of 'software engineer' would be written as: an engineer who designs, develops, and maintains computer software.

Categorization is a very powerful notion that is fundamental to the reasoning a concept model supports. This discussion here only scratches the surface.[4] There are important questions to ask about a categorization; here are just a few.

To explicitly disallow something, of course, means writing some business rule(s).

Finally, ask yourself this: Have I over-generalized? (And how do I know?) Don't get carried away with all the possible categorization hierarchies you can imagine. Include only what is useful and productive for concise business communications, nothing more.

The default wording for a property connection is (thing1) has (thing2). The important word here is has. In English, the verb to have is very general — not specific or descriptive at all — and often acts as a catch-all that obscures precise meaning. Best to avoid using it as a verb in your concept model except for property connections.

For properties, has is a very convenient default. In fact, when the verb has is used, the preposition 'of' (shorthand for 'is of') is implicitly available for expressing the reverse direction of the connection. This means you now have the preposition 'of' to use in business communications regarding that property. For example, while you can say "… the commission rate that the sales agent has …", now insteaad you can say "… the commission rate of the sales agent…." This usage permits business statements in a very concise, natural form of expression.

Orientation, which can be seen in Figure 1 just above the crossbar for product's group of categories, is also a property, albeit a special kind. Orientation is the name of the categorization scheme used to organize the three kinds of product. Since orientation is a property of product, you can say product has orientation.

Is it required that every product fall into at least one of the three categories: military, government, or consumer? In other words, must every product have an orientation? (Or perhaps exactly one?) Never assume so — that would require some explicit business rule(s).

Things are often composed of other things; that is, they are compositions of distinguishable parts. For example, an automobile (simplistically) is composed of an engine, a body, and wheels. A mechanical pencil is made up of a barrel, a lead-advance mechanism, pencil lead, and eraser.[5] An address (simplistically) includes a street number, a street, an apartment number, a city, a state/province, a zip code/postal code, and a country.

Sorting out the terminology and composition of such whole–part structures is often quite useful. In a concept model a whole-part concept structure is a collection of one or more binary verb concepts that jointly represent how one kind of thing (the whole) includes (typically) two or more other kinds of things (the parts). Such a composition can be represented in a concept model diagram as in Figure 2. 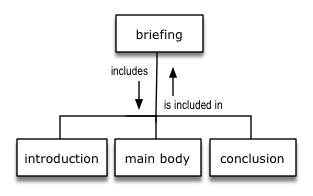 Let's address some relevant questions that need to be considered when fully fleshing out the meaning of a composition structure.

Classification is actually a very simple idea. It means that a particular thing is enough like some other things that it can be put in the same conceptual bucket with them. For example, Isaac Newton, Albert Einstein, and Marie Curie can all be classified as scientists. Grouping things mentally this way is second nature to humans (but not to machines).

A general noun concept classifies potentially many things on the basis of common properties. If a thing possesses all the common properties, it is placed within the conceptual bucket. If the thing doesn't, it isn't.

An instance is any of the things a concept corresponds to — anything that lands in that conceptual bucket. Some concepts have a great many instances. For example, a company might take thousands or millions of orders. The instances of some general concepts are actually infinite — for example, number.

For most concepts, the instances are not known in advance and are too numerous to be included in a concept model. Sometimes, however, you do want to record the names of selected instances, especially for those concepts where the instances are prescribed in advance and relatively stable. For example, the names of currencies the business deals in. Moreover, the business will need to pre-define instances when it has some business rule(s) that pertain selectively to them — for example: An order may be priced using the Canadian Dollar only if the customer placing the order is located in Canada.

Making the connection between an instance and its particular general concept is called classification. Figure 3 illustrates. 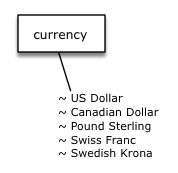 [4] Exploration of questions such as these is beyond the scope of this introductory discussion. For in-depth coverage of the many aspects of categorizations, see Chapter 10 "Categorizations" in Business Knowledge Blueprints (op cit).

[6] Using a double-wavy hatch mark (tilde) on the connector line to indicate classification is an acceptable alternative graphic convention.

[7] A neighborhood is a page or tab in a large graphical concept model diagram that generally concentrates on categories, properties, and instances for just one or several core concepts.