Summary: The elements of structure that tie together the concepts of a concept model come in two basic varieties, standard relations and verb concepts. Last time Ron described three basic kinds of verb concept. In this part of the series on ConceptSpeak™ he discusses two kinds of nouns that are based on verbs: objectifications and roles.

As the previous parts of this series explained[3] the richness of your concept model and the related vocabulary for expressing knowledge arises in large measure from the verb concepts you define. What hasn't been discussed is that the meanings of many of your nouns — more than you might imagine — are tied inextricably to verb concepts. You can expand the precision and expressive power of your vocabulary dramatically by understanding and exploiting these natural connections.

There are two fundamental ways in which nouns arise from verb concepts: objectification and verb-based role. The former addresses the whole verb concept all at once; the latter addresses one noun concept at a time in a verb concept. This part of the series discusses each in turn.

The noun concept that results from objectifying a verb concept is called an objectification. In natural language, this occurs frequently, for example:

Instances of objectifications, just like instances of the verb concepts they objectify, always exist in the real world (universe of discourse). When you say ownership, for example, picture me standing next to my red car in the carport of my house, waving a car title.

As an example[5] consider person leases vehicle. The term for its objectification that probably first comes to mind is 'lease' (or 'vehicle lease'). Yet when you use that term, the meaning it invokes is a legal document signed by the parties. 'Lease' in that regard is like car title — a different concept than the intended objectification. Ask yourself, "Do I really need this objectification?" After all, when you need to talk about instances in a sentence, you can simply say "a person leasing a vehicle" (or "a vehicle being leased by a person").

Objectification is represented in a concept model diagram as in Figure 1. 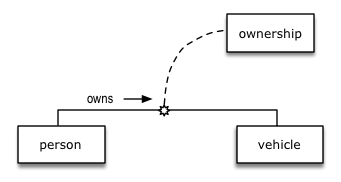 While the example given illustrates the objectification of a binary verb concept, a verb concept of any arity can be objectified in this fashion.

Suppose I say "Lions hunt zebras." Lions and zebras participate very differently in this connection (as zebras know all too well!). Specifically, the lions play the part hunter, and zebras play the part prey. If the verb concept is correct and the wording not misleading, there's not much choice about that interpretation.

The designations for verb-based roles are always based on nouns and always considered terms. As entries in the table above illustrate, such terms can be qualified — e.g., stolen vehicle. Sometimes, but not always, the qualification directly reflects the verb symbol — e.g., stolen reflects steals in person steals vehicle. Terms for verb-based roles can also have synonyms. For example, the role of driver could also be termed operator.

Some questions you should ask: Are all owners actually vehicle owners within the scope of the concept model? Can a person be an owner of something else — for example a house? As specified in this example, owner always means vehicle owner. Is that likely to cause confusion? Would vehicle owner be a better choice?

The nouns and noun phrases suggested as verb-based roles in the table above are not all necessarily good or useful designations.[7] Like any other term, the simple test of a role noun should be "Is this new term going to be useful in our business communication?" The following sample business rule illustrates how the verb-based role term provides a concise, easily-understood statement.

Business Rule: A parking citation may be given only to the owner of a vehicle.

But let's suppose for the moment all the new nouns in the table above are deemed useful for business communications. How might you represent them in a concept model diagram? Figure 2 illustrates all eight verb-based roles.

The four verb concepts above happen to be binary, but verb-based roles apply to unary and n-ary verb concepts too, as Figure 3 illustrates.

[4] The Merriam-Webster Unabridged Dictionary definition of objectify is [1a]: to cause to become or to assume the character of an object.

[5] Things can go badly out of sync when objectifying a verb concept. Business Knowledge Blueprints (op cit) has an in-depth discussion of various aspects to consider when deciding to objectify a verb concept in a concept model (pp. 166-171).

[7] An in-depth discussion of how to decide when to use a verb-based role is out of scope for this article, but Business Knowledge Blueprints (op cit) has a comprehensive examination of the question of whether the term proposed for any given verb-based role is a good one, or even a useful one (pp. 158-162).