Summary: In this month's issue of 'Semantics for Business', Sjir Nijssen has invited a guest author to give some of the history of the Orange Report and to summarize its basic subjects. The "ISO Orange Report TR 9007 – Concepts and Terminology for the Conceptual Schema and the Information Base" is a widely acclaimed early publication that recognized the importance of formalizing semantics of information. This column is the second in a series on the Orange Report. In this instalment Joost J. van Griethuysen outlines the seven very fundamental principles that the ISO TC97/SC5/WG3 Working Group developed over the course of their meetings.

The ISO Orange Report TR 9007 – Concepts and Terminology for the Conceptual Schema and the Information Base is a widely acclaimed early publication that recognized the importance of formalizing semantics of information:  To understand the information needs of an enterprise we need models of the enterprise, the things and affairs it must know about, and the parts of the enterprise involved in information exchanges.  This column is the second in a series giving some of the history of the Orange Report and summarizing its basic subjects.  Last time, we learned some of the history behind the ISO TC97/SC5/WG3 Working Group.  In this instalment the author outlines the seven very fundamental principles that the group developed over the course of their meetings.

During the Meetings of the ISO TC97/SC5/WG3 Working Group, seven very fundamental principles were recognized:

In Helsinki (1978) some very vigorous discussions were going on about wording.  Do you know the difference between 'relation' (US), 'relation' (UK), and 'relation'(France)?  There is!  And one needed multi-lingual people — like Belgians, Canadians, and Dutchmen — to discover and help to resolve that.

The problem clearly was in interpretation — the semantics.  Thus, it was established that one should solely interpret the used words and sentences in the way the speaker had meant them.

But how could this be achieved?

It was found that a common vocabulary was a necessity for a semantic community — although that term was not yet discovered.  We formulated it differently in the Helsinki Principle:[ISO1982]

These utterances are to be interpreted as English utterances:[OED1933]
Any meaningful exchange of utterances depends on the prior existence of an agreed set of semantic and syntactic rules. The recipients of the utterances must use only these rules to interpret the received utterances, if it is to mean the same as that which was meant by the utterer.

It was already clear that we were addressing interpretations, the semantics of information, and we wanted to model that.  The information described referred to a part of a world we are interested in and want to know about:

Therefore somebody had to observe that world and describe it, others read that, and in doing so might visualize that world.  The notion Universe of Discourse[1] was introduced, and the concepts of Conceptual Schema,[2] Information Base, and Information processor together formed the Information System.  The Environment containing the interested observers — the users — was recognized.  Who those observers were was considered not relevant.  The only capabilities needed were to observe, to describe, and to interpret.  This is shown in Figure 1. 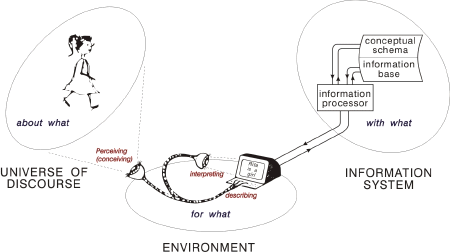 And the discussions were again vigorous.  That started in Brussels (1978), cumulated in Namur (1980), and it was finally settled in Garmisch-Partenkirchen (1981).  In short, the point was whether our descriptions were a model of a real world or of some abstraction of it.  If the interpretation of the descriptions refers to that abstraction, then to what refers that abstraction — to the real world or what?  We met a level of abstraction.  In the discussions again we met a level of abstraction, another one, and another one.  Plato was beyond our reach.  Therefore, finally, Mr. T was consulted[HOF1979] (Figure 2). 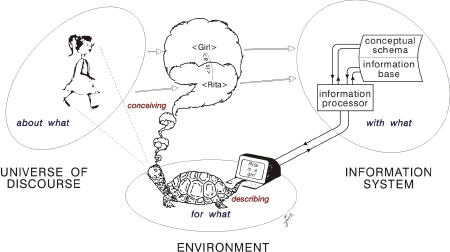 Figure 2.  "Let's see … If I were meta-agnostic, I'd be confused over whether I'm agnostic or not — but I'm not quite sure if I feel THAT way; hence I must be meta-meta-agnostic (I guess)."

The conclusion was as in Figure 1; three groups of aspects were discerned:

The Metaphor of the Searchlights

A number of discussions were around the question whether there existed only one universe of discourse and whether we needed only one conceptual schema.  Few realized that merely discussing this already proved the contrary.

Even when you assume there is only one planet Earth, many worlds can exist.  The scope and complexity of the planet Earth is such that no single observer, or any manageable group of observers, can possibly be interested or grasp it all.  More practically, a user rarely needs all information relevant to an enterprise.  Only the part he is interested in — that which he needs to carry out his work — is relevant.  Enterprise organization reinforces this:  Each unit, department, or division is only concerned with its own domain of interest. 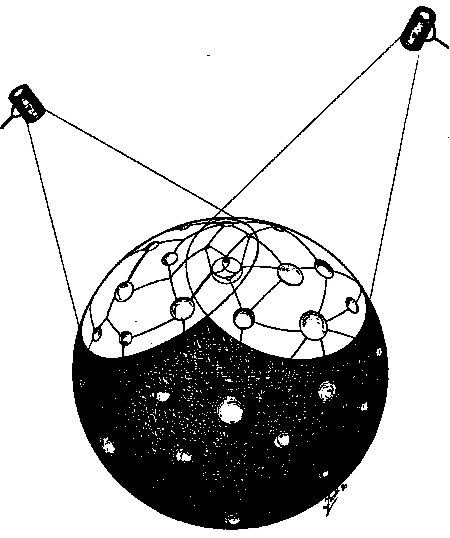 Figure 3.  The Metaphor of the Searchlights

These considerations lead in 1981 to a third principle, that of the different viewpoints:  Each user has, so to speak, his own searchlight that illuminates his world — his viewpoint.  This is symbolized in the Metaphor of the Searchlights illustrated in Figure 3.  This metaphor is one of the principles on which modern information engineering should be based.  Each user sees only his part of the world, and this user view is separately described.  Its importance was considered so basic that it was chosen to be shown on the title page.

An individual can have more than one viewpoint, one for each subject in which he is interested or has to deal with.  When a manager focuses on the sales of his company, he considers different things from when he is considering employment problems.

The 100% Principle and the Conceptualization Principle

The guiding principle in selecting the necessary items in a conceptual schema is that they, although stating something about the universe of discourse, are relevant to controlling the consistency of the information and how it may be manipulated.  The following two principles for the conceptual schema should be observed at all times:

All relevant general static and dynamic aspects, i.e., all rules, laws, etc., of the universe of discourse should be described in the conceptual schema.  The information system cannot be held responsible for not meeting those described elsewhere, including in particular those in application programs.

A conceptual schema should only include conceptually relevant aspects, both static and dynamic, of the universe of discourse, thus excluding all aspects of (external or internal) data representation, physical data organization and access, as well as all aspects of particular external user representation such as message formats, data structures, etc.

Note, that this does not include any statement about how the information is to be processed in an information system and what kind of mechanisms should be available.  It only implies that such mechanisms find the required rules to guard and guarantee (semantic) consistency.

The Figure is slightly adapted to reflect the results of the final discussion on this subject as found in the texts of the report.

The seventh principle concentrates on the distinction between meaning (semantics) and form (syntax) of the information.  Typically we should concentrate on what about what we are communicating among each other, but we have to pay attention to how with what we do it.  This is the first step:  distinguishing between the Conceptual level and the representation level(s).

A next refinement is distinguishing between in what form the information is presented by us and to us — how we see or hear it — and the forms used to manipulate the information by whatever technical (or human) means and mechanisms.  This is a distinction between forms on an External level — visible or audible to us — and forms and ways on an Internal level — internal in the used means and therefore invisible or inaudible to us (we hope).  Most of us then only need to pay attention to the forms on the external level — the external representations.  Only a few among us — the technicians — have to pay attention to the forms on both these levels of representation.  (Indeed, you experts!  Not only the internal forms!)

The Report presented this principle as The Three Level Architecture — a basic architecture for any means of communication — although the group thought of computer means in the first place.

This architecture also demonstrates, together with the second principle, the double role of a conceptual schema: 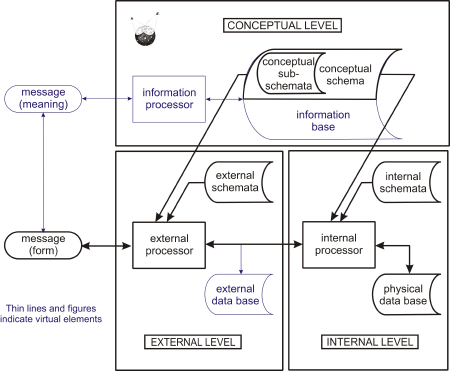 The Report makes it very clear, that — at the conceptual level — it is also important to pay attention to and specify what changes in the information are possible and/or permissible, without bothering about how this is done.  These changes may be the results of changes and behaviour within the universe of discourse, changes of the universe of discourse itself — shifting the searchlights, zooming in on details, zooming out to more general views, etc., and adding or discarding views.

A third set of specifications at the conceptual level is the control for whom or what the information may be available, who is authorized to changes, and what other security measures are necessary — again without dealing with how this is done.

Next time, we will explore the basic facts covered by the Orange Report.

[2] The following quotation is from William James[JAMES1890] and is probably the first cited occurrence of the term:

The conceptual scheme is a sort of sieve in which we try to gather up the world's contents. Most facts and relations fall through its meshes, being either too subtle or too insignificant to be fixed in any conception. But when a physical reality is caught and identified as the same with something already conceived, it remains in the sieve, and all the predicates and relations of the conception with which it is identified become its predicates and relations too; it is subject to the sieve's network, in other words. Thus comes to pass ... the translation of the perceptual into the conceptual order of the world.