Not Just The Decision Table Guy

Summary: Tabular models for decisions is a powerful technique highly relevant for business rules, business processes, business knowledge, and related areas. The now-familiar technique has a long and rich history dating at least to the 1950s, with a milestone standard in the 1980s, and a continuous evolution in the nineties and up to the millennium. It has ever since been a modeling technique well suited for business and business analysts. For whatever reason frequently forgotten and re-invented, on-going experience and developments with the technique have been widely practiced and well documented. In this month's column, Jan Vanthienen launches a new series that brings the reader up-to-date on the rich history of tabular models for decisions. This first part of the multi-part series acquaints readers with the origins and basics of this important technique. The other five parts will deal with a wealth of topics such as best practices, development methods, table structures, verification and validation, tooling, and business experiences.

Although at first sight decision tables look almost the same as in the days of their first developments, some evolution in form and content, as well as in application areas, can be noted.  The power of decision tables and table structures to model, represent, and implement complex decision situations in a compact way — easy to check for completeness, consistency, and correctness — has however always been the common factor.

This is the first part in a series of articles that brings the reader up-to-date on the rich history of tabular models for decisions.  Although the overview is not complete because of space and time constraints, a reasonable insight into prior art will allow the reader to appreciate this powerful — yet often forgotten and re-invented — technique that is worth examining in the context of business rules (and business processes).

The overview is historical, so as to bring some order to the developments.  But this classification does not intend to diminish the value of earlier achievements.  In fact, some of the findings and basics have been known for a long time (or at least should have been), but that does not make them outdated or any less valuable.

The series will consist of six parts, covering decades of decision table research and practice:

Part 1.  Early developments and fundamentals
The sixties and seventies:  conversion and algorithms
The 1982 CODASYL Report of the Decision Table Task Group

The concept of decision tables was first reported in 1957, in data processing applications, more specifically in programming [see NCC 70].  The story goes that General Electric, the Sutherland Corporation, and the USAF had unsuccessfully tried to define a complex file maintenance problem for more than six man-years, and then defined the problem with four people in four weeks using decision tables.  Earlier descriptions of the stages in the history of decision tables can be found in Pollack, Hicks & Harrison [71], Maes [81], and CODASYL [82].

Because of its representational capabilities, the decision table was introduced as a structured alternative to classical flowcharting.  Structured programming had not yet been born, but it was clear that the decision table could offer a solution to the spaghetti structure of complex conditionals by grouping related conditions in a table, where each column (or row) corresponds to a different situation, thereby allowing easy checking for the three C's:  completeness, consistency, and correctness.

The decision tables at that time were limited-entry tables (conditions had only two values:  Yes or No).  But the fundamental design of the table was already there:  conditions are listed in a certain order, and every column represents a conjunction of specific condition values for the conditions in the given order, e.g.:

if condition1 is true and condition2 is false then indicate some result.

Because the names of conditions and actions were only written once (in the 'stub') and did not have to be repeated in every column, the table was rather compact.

The ability to represent conditional logical expressions in a readable, compact manner and the ease of adaptation and consistency checking were considered to be a solution to the problem of growing program complexity (Montalbano [74]).

Originally the tables were manually translated into code.  A number of specific languages and initial preprocessors were soon developed (1961-1962) in order to convert the two-dimensional decision table into linear program code (rule engines were not available yet!).  Due in part to the limited efficiency of these simple processors, the initial interest did not lead to a general acceptance of decision table programming.  But the use of tables for code generation remained and the name 'Decision Tables' became the standard term.

The sixties and seventies:  conversions and algorithms

From 1965 onward, more attention was paid to the optimization of the conversion process, followed by the emanation of more powerful commercial preprocessors.  The Canadian Standards Association issued a first formal standard for decision tables (CSA [70]).

Conversion of decision tables into program code means that an efficient execution tree has to be generated for all the combinations of the condition values.  A different path in the execution tree can test the conditions in a different order; therefore the number of possible trees is enormous (and grows fast with a larger number of conditions).  Additional information used in the conversion algorithm can be:  the test time for each condition (if not available, all test times are considered equal) and case frequencies.  In that way, the average execution time for the decision can be minimized.

The conversion of decision tables into program code also means that the original sequence of the conditions in the decision table is not fixed for execution, because it may be optimized during implementation.  This is probably one of the first instances of model driven architecture, where the implementation is separated (and generated from) the tabular specification model.

The findings about the decision table technique and the best practices were discussed and summarized by the Decision Table Task Group, installed by CODASYL (Conference on Data Systems and Languages) and chaired by dr. Paul C. Jorgensen from 1975-1978.  The group produced the excellent report "A Modern Appraisal of Decision Tables" (Figure 1), which offers an interesting and often neglected overview of the state of the art on decision tables (CODASYL [82]). 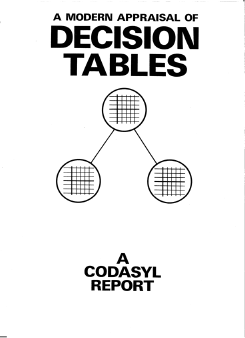 Quoting from the report, the purpose was "to define decision tables, to explain much of the underlying theory, and to recommend a development methodology that centers on decision tables."  The conclusion of this report is that, when properly used, decision tables are an excellent tool for problem analysis, specification, design, coding, and documentation.

The report contained the following chapters:

As can be seen from the Table of Contents, a full overview and a number of new developments were described:

… more about the CODASYL Report in Part 2

Jan Vanthienen is professor of information management at the Business Information Systems Group of KU Leuven (Belgium), where he is teaching and researching on business rules, processes and decisions. The area of business rules modeling, validation and verification, and decision modeling in the context of business process modeling has been his major area of research and expertise for many years. He is a regular speaker at BBC, where his nickname seems to be: not (just) the decision table guy.

Read All Articles by Jan Vanthienen