Summary: The Zachman Framework™ has evolved over time and has a rich history in the space we call ”Enterprise Architecture.” While the fundamental concepts have not changed at all, refinements to its graphical representation, in addition to more precise language, embody The Framework's history and what you see today. Last month we began a trip down its historical evolution, from its beginnings in 1984 through 2004. This month, John P. Zachman completes the journey through Framework history, covering the years from 2011 to the current day.

The Zachman Framework™ has evolved over time and has a rich history in the space we call "Enterprise Architecture."  While the fundamental concepts have not changed at all, refinements to its graphical representation, in addition to more precise language, embody The Framework's history and what you see today.  Last month we began a brief trip down its historical evolution, from its beginnings in 1984 through 2004. 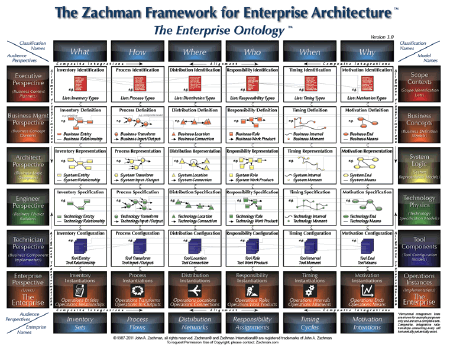 After a few years of internal re-structure within Zachman International, John proceeded with a new version of the Framework, unfettered by any outside influence.  This was the only version since 2001 that John had complete control over and graphically designed totally in-house.  The significance of this, during its 12 months of development, was that John was able to make all the decisions about content changes without any internal push-back.

In addition, not wanting to alienate the community or be perceived as a dogmatic, self-imposed authority on EA, John solicited input from key people in the EA space at this version's near completion in 2011.  John looked for input from representative members of the academic and consulting communities, from leading authorities in the data and process modeling communities, experts in distribution and Business Rules, and from key tool vendors.  Armed with input from these various authorities, he made several final adjustments to the image that would finally represent the most EA-inclusive representation of The Zachman Framework, containing all the improvements in the evolution of John's, and the community's, understanding of Enterprise Architecture and The Zachman Framework over the last 40 years.

Aesthetically, it is a tribute to his original 2001 Framework image and subsequent versions.  It's labeled with a "Version 3.0" because it is the third graphic representation (1st:  2001, 2nd:  2004) that John had all, or most of, the control of its production.

The most-striking changes start with an upgrade in the graphics (i.e., translucent outer banding, metallic models, etc.).  However, these superficial changes pale in comparison to some of the significant content changes and changes to the meta-model.

First, you'll notice this graphic is subtitled, "The Enterprise Ontology."  This suggestion came from the folks in the academic community.  They were observing that there are many "Frameworks" in EA and that there is significant confusion about what the word 'Framework' actually means.  Sadly, this confusion erroneously puts The Zachman Framework in competition with these other "Frameworks," rather than in support of them.  Most of the confusion about the various "Frameworks" stems from the fact that the majority of EA "Frameworks" in the industry are methodologies derived from the The Zachman Framework.  The Zachman Framework clearly has no methodological implications.  John's Framework is an ontology — or the complete set of all the "elements" that exist in the Enterprise (much like what the Periodic Table of Elements is to Chemistry).  It infers nothing about HOW EA is done; it only defines the SCIENCE of what EA is... or the ontology.

The academics polled suggested changing the name of The Framework to:  The Zachman Ontology for Enterprise Architecture.  While this would definitively be more accurate, and move The Zachman Framework out of competition with other EA 'frameworks', John prudently decided not to discard 40 years of momentum in the industry that the title of his Framework holds.  Therefore, he decided to subtitle this version to indicate there is more going on than just another alternative to EA Frameworks and that The Zachman Framework actually supports all of them.

Next, this representation's most obvious change is the addition of the "Integration lines" linking ontological elements between the columns.  As previously stated, integration across the Rows has been a common misunderstanding, perpetuated by previous versions, due to the artistic difficulty to represent this graphically.  Therefore, John represented integration between the cells with these lines.

This is not the case at all.

The models of each Row TRANSFORM — they do not get more detailed.  Level of detail is represented in the height of each cell, i.e., a high level of detail at the top EACH CELL and an excruciating level of detail at the bottom OF EACH CELL, NOT as you work your way down the Rows of each Column.  After testing several different transformation notations with the test groups, one very well-known name in the Business Rules community suggested the "crooked arrow" notation to indicate transformation; John did not waste any time implementing.

The models in each cell are re-designed and transformed to the next Row below, and a complete Row 6 wraps up the 6th phase of reification (the 2000-year-old, well-known process for turning an abstract idea into reality:  Identification—Row 1, Definition—Row 2, Representation—Row 3, Specification—Row 4, Configuration—Row 5, and Instantiation—Row 6), further proving The Framework's fundamental concept of transformation, not decomposition, in the reification process down each column.  An idea (or Scope—Row 1) has to go through 6 well-known phases in order to reach reality (Operations—Row 6) such that the reality retains an alignment with the initial idea as it was conceived and designed.  It also encourages architects to get embedded instances out of their architecture and make sure instances are only recorded in Row 6 (see 2001 version, Figure 7).  The instantiated Enterprise is represented in Row 6 whereas Enterprise Architecture is comprised of Rows 1-5.

The terminology banding around the outside of the matrix has been selected to include names from the Enterprise as well as John's original names deriving from the older disciplines of Engineering and Manufacturing and Architecture and Construction.

Audience perspectives have been labeled, moved from the right to the left, to further attract the attention of General Management as well as having been refined.

After extensive research it was also clear that the meta-model of the Framework needed looking after and further fine-tuning.  Business Process experts suggested changing the Column 2 name from Process Transformations (see the 2004 discussion) to Process Flows — a more descriptive representation of this column to General Management.

Also, Column 3 (Network Nodes — 2004 version) was grossly misunderstood because of this terminology.  EAs often thought of this as point-to-point nodes and were not building their models correctly.  John had been talking quite extensively that the fundamental concept of this Column deals with distribution of resources as opposed to node addresses on a network.  Column 3 (and its Column 6 icon) changed to Distribution Networks, a FAR better description for this Column.

Additional meta-model changes occurred in Columns 5 & 6 as well.  The 2004 version confused quite a number of people with its title:  Organization Groups.  As soon as Enterprise Architects saw this label, they incorrectly assumed:  Organizational Chart — not so.  This Column is all about responsibility.  Accordingly John aptly changed the meta-model to form the title Responsibility Assignments for Column 4, to which there have already been rave reviews.  Last is Column 5 changing from the 2004 version Timing Periods to Timing Cycles — again, more descriptive for the new intended audience.

There are a few more changes to the meta-model names down some of the columns, some refinement of descriptive terms, labeling of model examples, a change to icons in Row 6 for an updated look, and a few others.[1]


What had NOT changed?


This article can also be viewed on John's website — presented here, with permission.

[1]  A book detailing these changes will be released shortly — register at Zachman.com for notification of release.