Summary: John Zachman's 'Framework for Enterprise Architecture' is a matrix that is widely used in describing and defining the various interrelated elements of the enterprise and its systems. One of the important efforts over the twenty years since the introduction of the Zachman Framework for Enterprise Architecture has been the definition of each of its cells. In this month's feature, Allan Kolber shares his perspective on the model for 'Motivation' cell (column six) at Zachman row one.

John Zachman's "Framework for Enterprise Architecture"[1] is a matrix that is widely used in describing and defining the various interrelated elements of the enterprise and its systems.  One of the important efforts over the twenty years since the introduction of the Zachman Framework for Enterprise Architecture has been the definition of each of its cells.

John Zachman proposed general definitions of the six columns of the Framework as being based on the six aspects of an enterprise, equivalent to the six classic interrogatives of journalism:  who, what, when, where, why, and how,[2] although John reordered them (a subject which this author will leave for a different article).  The six columns of the Zachman Framework are:

The six rows of the Framework correspond to the six primary perspectives (views, or roles) that deal with the enterprise:

The thirty-six cells of the Framework are simply the cross between a column aspect and a row perspective.  However, the precise definition of any given cell is dependant not only on the general definitions of its aspect and perspective but also on the state of standards that constrain methodology and techniques.  Some cells are better understood by the industry than others, and some cells have had specific efforts towards developing standards for their meta-meta (or schema) model, a useful activity for anyone in the repository business. 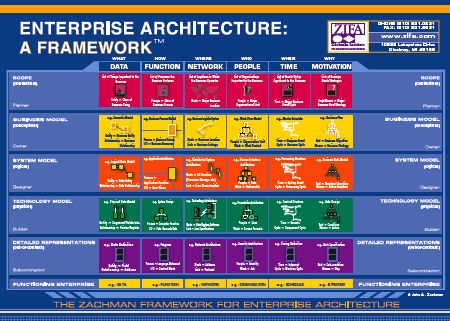 Figure 1.  The Thirty-six Cells of the Zachman Framework  (a larger view is available at ZIFA.com).

In 1988, a Guide[3] project on Modeling Extensions was launched; for two years it explored a variety of controversial modeling issues, with the approaches for expressing Business Rules one of its major topics.  Over the next four years, the Guide Project for Business Rules developed a seminal paper on the meaning and model of Business Rules at Zachman row three.[4]

Over the last few years, the Object Management Group (OMG) has been developing the concept of Model Driven Architecture (MDA) and has come to realize the importance and distinct nature of the Business level and the need for standards for Business modeling.  The Semantics for Business Vocabulary and Business Rules (SBVR) as a standard for semantic modeling at row 2 and a source for the information needed to build logical data models at row three is one of those efforts.[7]  The BRG has been a leading contributor in this effort to complete the steps necessary to make SBVR a Final Adopted Specification.

With the experience gained in the SBVR activity, the BRG last year proposed the BMM for adoption by the OMG, with the OMG accepting it for the finalization process and Final Adoption.  Thus the model for column six/row two is essentially settled.  With this acceptance, the theoretical issue of interest has moved to the 'Scope' level at row one.  The BMM does not specify the model for row 1, and the BRG has not issued an opinion on this.  While various authors have selected different constructs to express scope, in essence, there is no standard.  In this paper, I present a solution for the Scope level model for column six, a solution that has successfully played out in client projects.

To guide this discussion, two statements by John Zachman about the fundamental nature of the Framework are relevant.

Following the second idea, different practitioners and theoreticians have suggested various candidates for the list, including:  goals, objectives, strategies, business rules, core goals, and core business rules.  John himself has used different terms in different versions of the Framework;  Ron Ross has his own ideas in this regard, especially in the use of "Core Business Rules."

All of these have some value in establishing scope, but how to choose among them?  In practice, this approach of selecting one of the fundamental model elements for the row-one list never seemed to work for column six.  Further, since each of the candidate elements is either an End (goals and objectives) or a Means (strategies, tactics, and, until recently , business rules), choosing one, such as strategies (Means), would seem to leave out the corresponding concept, in this case goals (Ends).  Finally, it is questionable whether any one or combination of these concepts is better than the others at establishing scope.  I believe there is a better solution to this issue.

When we look at the tops of the Ends and Means trees in the Business Motivation Model, we find the enterprise's Vision and Mission.

Vision and Mission are inherently the longest-term view of Ends and Means.  They are typically stable over time.  They clearly are appropriate to establishing scope.  For those who want a list for the row one/column six cell, one could presume that there is a Vision/Mission pair for each organization unit in the enterprise.  The main criticism in Zachman circles to using these paired concepts to form the row one/column six list is that all the other columns seem to be satisfactorily represented by a single multi-valued list.

This solution has been tested at many clients, several of whom have defined the deliverables for all cells of the Framework.[8]  In every case, the client chose Vision and Mission as their model for the Scope level of Motivation.

It should be noted that adopting this approach would not require modification of the Business Motivation Model.  The only change would be to declare that the BMM covers both the Scope model and the Business model.  No new concepts -- such as Core Goals or Core Rules -- are required, although their value as custom methodological extensions to the BMM at row 2 are interesting and should be analyzed as a potential best practice.

Figure 3.  The View of Ends and Means for Rows One and Two

In summary, adopting Mission and Vision as the concepts that define the Scope of enterprise Motivation provides a proven standard for the metamodel for Zachman column six (Motivation) at row 1.

[1]  In 1987, John Zachman published his classic paper on the 'Zachman Framework'.

Information on the Zachman Framework for Enterprise Architecture is available at:  http://www.zifa.com/

[2]  In his 1992 paper (with John Sowa), John Zachman extended the 3-column Framework to the full 6-column version.

[3]  Guide International was an independent, volunteer-run association of IBM users, which was popular through the 1990s.

[8]  These included Vitro Corporation and the United States Custom Service.

With 30 years of experience, Allan Kolber is an authority on Enterprise Architecture and the Zachman Framework, Enterprise Modeling, Business Rules, Data Warehousing, Data Quality Improvement, and the Business Motivation Model.

Starting as a research scientist and biostatistician, he became Manager of Data Processing for the Institute of Reconstructive Plastic Surgery at NYU Medical Center. There he was responsible for the total implementation of office automation, data acquisition, data analysis, and the development of advanced computing capabilities, such as 3-D surgical simulation and image analysis. He also designed the national Muscular Dystrophy database. Becoming a consultant, he became an expert in data administration and DB2 database administration. He led the design and development of the repository and the metadata environment used by the Defense Logistics Service Center. He has done many Situation Analyses, Structured Assessments, Project Audits, Design Reviews, Data Warehouses, and architecture-related engagements.

Allan has spoken on many topics over the years, in particular focusing on the Zachman Framework and metadata related topics. He has recently focused on the Business Motivation Model and its applications.

Read All Articles by Allan Kolber