Summary: Process change projects — large and small — offer numerous opportunities for derailment, not least among them the many differing perspectives held by interested parties. Derived from his years of experience as a BPM practitioner and consultant, Roger Burlton developed a technique to avoid such derailments. He urges a rigorous program at the outset of the project that involves personal goal alignment with the organization’s business and customer requirements. In this month's In Process column, Roger shares his insights and methods to achieve this alignment.

Process change projects are inherently risky propositions, and the bigger the change the riskier they become, since there are more perspectives to derail the effort and exponentially more unknowns to be dealt with.  There are also more people who have an opinion or want a say in the end result.  Some of them are involved in the process in some way.  Some are affected by the process indirectly.  Some are just interested but still have some point of view.  Many of them are not clear on their view or why they have it, but that will not stop them from disagreeing with one another at some point regarding what's important or needed.  In many cases they do not even know they do not agree on what success looks like.

But one thing seems to hold true.  If the results do not satisfy everyone it won't be much fun, especially if we find that out late in the game.  The cynics may say that we can at least pass the buck and blame the process project team, and certainly the project manager, for not satisfying the set of unaddressed and irreconcilable differences.  Meanwhile, the business suffers from a lack of required process capability.  There will be plenty of blame to go around, but as my favorite Murphy's Law states, "Whatever hits the fan will not be evenly distributed," so duck.

So why does this happen, and what can we do about it?  In my experience, process projects go off the rails more from unaligned expectations and lack of common ground than from anything else.  We are smart enough to do the work if we know what we are aiming for.  If everyone has a different understanding about what success looks like, then the project will definitely fail, either in its operational results or its execution.

One thing about process perspectives is that most people are not clear about them, or even aware of them in many cases.  I refer to these as tacit perspectives as opposed to well-documented, explicit ones.  An example of an unaware tacit perspective is one that comes from a functional group leader who argues for their group's interest.  Such an individual might be the Sales VP who will argue against any process that counts returned goods as a deduction from the sales incentives scheme, even if it is better overall to not sell something that will lead to customer dissatisfaction after the sale.  I am not implying that sales people do not have the interests of the company at heart, but they will not jump, just like that, behind something that is worse for them.

Even if tacit views are not always apparent, that does not mean that the conviction for them is weak.  It could even mean that they may not be so easy to articulate, but usually the holder remains firm in disagreement.  If this happens at the end of the project, the consequences will be more severe than if the disagreement is aired earlier in the process project.  As the number of stakeholders expands, so does the likelihood that multiple unarticulated perspectives exist and that it will be harder to get everyone pointed in the same direction.  The bigger the process and the more stakeholders we have to deal with, the greater chances of tacit expectations, the greater misalignment of expectations.

The main perspective differences are the ones that occur from the outside looking in versus the inside looking out.  We get in a lot of trouble when the outsiders can see what's happening inside, as shown by Figures 1a and 1b. 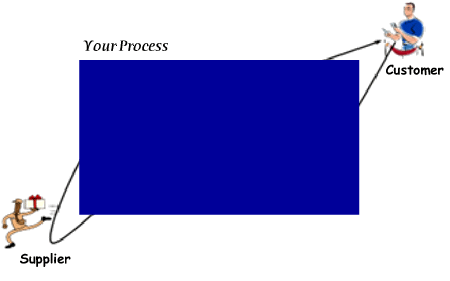 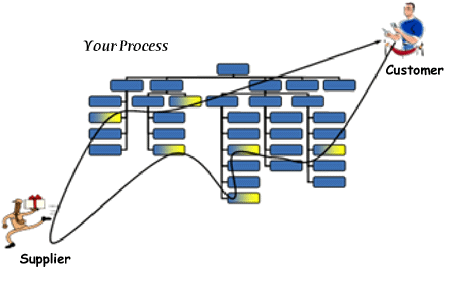 What happens is that the customer is often dragged across our internal organization chart, from department or group to department or group, in order to get anything done.  Each part of the organization has a different perspective on how to optimize their part, and they build capability from their own separate budget to do so.  Typically, this occurs because no one ever recognizes the full set of outsider interactions as a process, except the customer who is experiencing the frustration, of course.

So when we try to conduct a process project it should be no surprise that we get a lot of different mindsets coming into play.  The customer drivers should be clear but often are misunderstood by insiders.  Insiders also often don't seem to be all that concerned with the outside view, for a variety of awareness and motivational obstacles.  So when we ask the insiders what we need to achieve in our process projects we often get a lot of different answers.  Many of these have become mantras or platitudes about which the respondent does not have much of an understanding.  The following are some that I have heard many times:

Many of these can be reflected in the business performance chart shown in Figure 2, first shown in my book, BPM:  Profiting from Process. 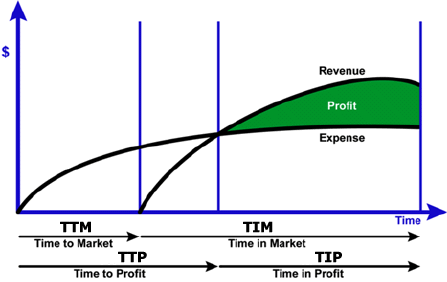 This picture plays well with senior insiders since it captures four traditional dimensions of performance required to put more green space (ROI) on the page:

However, these merely represent a starting point, and there is no guarantee that managers and other internal stakeholders are of a like mind on the compass points in play or what each one of them actually means with regard to the process in focus.  Perhaps the sales managers are looking north, the operations departments looking south, the R&D professionals looking west, and the product managers looking east, whether they realize it or not.

I know that as project manager I need more.  I need to know and have everyone else agree on the balance of "How much?" "By when?" and, unequivocally, "How will we all know when we have gotten there?"

Borrowing from the Object Management Group's Business Motivation Model (BMM), I advocate strongly the creation of a common commitment to a Process Charter that describes the process project, in order to create one integrated perspective.  Make sure that everyone can describe the following consistently:

If you take whatever time it takes to get these precepts in place at the beginning of your effort, you will more than make up the difference in executing the project, and the results will be of much greater quality.  You will have established criteria for decision making and consensus seeking that will be used all the way through the project.  The principle in play is "Establish your criteria before making any decision."

Roger is a respected pioneer in the introduction of innovative approaches for Business Management. He is a world leader in the field of Business Process Management, having authored one of the most read and followed books on the topic early in BPM's growth as well as the Business Process Manifesto. Roger's leadership is also witnessed by his position as chair of several of the most influential conferences each year on BPM and Business Architecture and by his role as chair of the BPTrends.com Advisory Board. The insights he brings to PRG's consulting clients are thoughtful and pragmatic.

Developing your Capability Architecture: It's All about Being Able to Get Things Done By Roger T. Burlton Oct. 2017 | Vol. 18, Iss. 10