Summary: Business rules should be validated by business domain experts, and hence specified using concepts and languages easily understood by business people. This is the thirteenth in a series of articles on expressing business rules formally in a high-level, textual language. In this month's column, Terry Halpin discusses verbalization of basic subtype constraints.

Business rules should be validated by business domain experts, and hence specified in a language easily understood by business people.  This is the thirteenth in a series of articles on expressing business rules formally in a high-level, textual language.  This article covers verbalization of basic subtype constraints.

The act of classifying an object type into one or more specific types is known as specialization.  In Object-Role Modeling (ORM)[2] and Entity-Relationship (ER) modeling, the specialized types are said to be subtypes of the more general type (the supertype).  For example, InPatient and OutPatient are subtypes of the supertype Patient.  In the Unified Modeling Language (UML)[16] [17], 'class' is used instead of 'type', so the terms 'subclass' and 'superclass' are used instead.  The inverse act of introducing a more general type is known as generalization.  Regardless of whether the inclusion of a subtype within a supertype is arrived at by means of specialization or generalization, the resulting model is the same.  The inclusion relationship between a subtype and its supertype is known as a subtyping or inheritance relationship.  Figure 1 depicts the subtyping relationship between InPatient and Patient in the graphical notations of (a) ORM, (b) UML, and (c) Barker ER.[1]

This verbalization is just a sugared version of the predicate calculus formula:  ∀x(InPatient x → Patient x).  In set-theory notation, this corresponds to the subset relationship InPatient ⊆ Patient, although to ensure proper subtypehood we need to add the restriction InPatient ≠ Patient.  In practice, the constraint requires that for each state of the business domain, the population of InPatient is a subset of the population of Patient.

In several versions of ER, including Barker ER, subtype classification schemes must always form a partition of the supertype (i.e., the subtypes are mutually exclusive, and they collectively equal the supertype).  For example, InPatient and OutPatient form a partition of Patient.  The mutual exclusion between the subtypes may be expressed in set-theory by declaring their intersection to be the null set (i.e., InPatient ∩ OutPatient = { }).  The claim that the subtypes are collectively exhaustive of their supertype means that their union equals their supertype (InPatient ∪ OutPatient = Patient).  In practice, these constraints apply to the populations of the types, for each state of the business domain.

Figure 2(a) depicts this partition in the ORM notation.  Here a circled cross attached to the subtyping arrows indicates that the subtypes are exclusive, and a circled dot indicates that the subtypes are exhaustive.  The two constraints are displayed together, one superimposed on the other, forming a 'lifebuoy' symbol.  This symbol may be considered as an xor (exclusive-or) constraint on the upper roles of the meta-fact instances corresponding to the subtyping arrows. 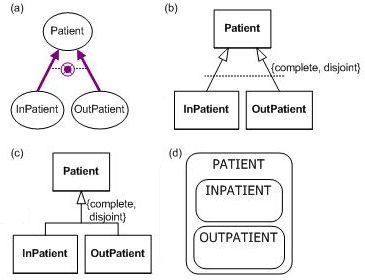 Figure 2(b) depicts the partition in UML in direct style (where each inheritance relationship appears as a separate arrow).  The relevant constraints appear in braces besides a dashed line connecting the subtyping arrows: 'complete' indicates that the Patient class is the union of the subclasses; 'disjoint' indicates the subclasses are mutually exclusive.  Figure 2(c) depicts the partition in UML in tree style (connecting the subtypes to the supertype via a single arrow head).  In this case, the constraints are placed in braces besides the arrow-head.

Figure 2(d) depicts the partition in Barker ER notation.  As with normal Euler diagrams, the exclusion between the subtypes is depicted by their separation (no visual overlap).  The Barker ER notation always assumes that the subtypes are exhaustive (if needed, an additional 'Other' subtype may be added to ensure this).

Regardless of the graphic notation used, the two constraints conveying the total (exhaustive) and  exclusive nature of the subtypes in Figure 2 may be verbalized separately as follows:

Here the use of 'an' assumes the ability to determine that the following object type name begins with a vowel sound.  If the object type name begins with a consonant sound, then 'a' is used instead of 'an'.  If such support is not provided, then 'a' is always used.  The two constraints may also be combined in a compact, single verbalization as follows:

If more than two subtypes occur in the partition, the totality constraint may be verbalized by a simple extension to the previous pattern.  For example, assuming the only possible marital states are single, married, divorced, and widowed, we have:

Alternatively, this constraint may be verbalized:

An exclusion constraint over more than two subtypes means pairwise-exclusion (i.e., no instance may belong to any pair of subtypes).  So the earlier verbalization pattern for exclusion between two subtypes has no simple extension for this case.  Instead we use the alternative pattern just discussed for totality, but replaced 'least' by 'most'.  For example, assuming the four marital states just mentioned are mutually exclusive, we have:

The two constraints may be combined into a single verbalization as follows:

These patterns for the case of more than two subtypes may also be used for the simpler case of two subtypes.

Figure 3.  Equivalent subtyping patterns in (a) ORM and (b) UML.

Barker ER does not cater for cases like this.  As a simple example, consider a case of multiple inheritance as shown in Figure 4.  Here FemaleInPatient is a subtype of the overlapping FemalePatient and InPatient types.  While such cases are supported directly in ORM and UML, Barker ER requires partitions for all subtype classifications, so the only possible approach it could adopt would be to use two separate diagrams for the two partitions; but even then it is unable to include FemaleInPatient as subtypes of both FemalePatient and InPatient.  This is the main problem with using Euler diagrams for subtyping, especially the restricted version of Euler diagrams supported in Barker ER:  for simple partitions they are more visually intuitive than directed acyclic graphs, but for more complex cases they are inadequate or unwieldy.  For a related example showing problems with unrestricted Euler diagrams, see [2 , p. 246]. 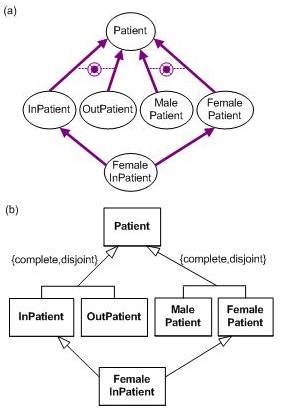 Returning to UML's '{overlapping}' and '{incomplete}' annotations, these are not really constraints at all (they instead indicate lack of constraints).  So they have no positive verbalization.  If desired however, a default verbalization could be provided to spell out the implications of the absence of a subtype totality or exclusion constraint.  For example, suppose that for some reason we wished to include Australian and MalePerson as subtypes of Person, as shown in Figure 5.  These subtypes overlap, since it is possible to have male Australians; and the subtypes are incomplete since there may be instances of Person that belong to neither subtype (e.g., an American woman).

Figure 5.  Overlapping, incomplete subtypes in (a) ORM, and (b) UML.

For this example, the absence of completeness and exclusion constraints may be explicitly declared by the following default verbalizations.