Summary: This is the tenth in a series of articles by Terry Halpin on a logic-based approach to business data and rules using a single language to both create and query data models. The previous article explained how to declare basic subtyping in LogiQL. In this month's column, Terry discusses how to declare relationships to be irreflexive (using a ring constraint) and symmetric (using a ring constraint or a derivation rule) in LogiQL.

The current article discusses how to declare relationships to be irreflexive (using a ring constraint) and symmetric (using a ring constraint or a derivation rule) in LogiQL.  The LogiQL code examples are implemented using the free, cloud-based REPL (Read-Eval-Print-Loop) tool for LogiQL that is accessible at https://developer.logicblox.com/playground/.

Table 1 shows an extract from a report that lists each country and which (if any) countries border it.  Each country is identified by its name and has zero or more countries that border it.  This example is based on an exercise from [7].  As an optional exercise, you might like to specify a data model for this example, including all relevant constraints, before reading on.

Table 1.  Extract from a report listing each country and its bordering countries (if any).

Figure 1 shows one way to model this example with an Object-Role Modeling (ORM)[5],[6],[7] diagram, using constructs discussed in previous articles.  Country is modeled as an entity type.  The appended exclamation mark indicates that Country is an independent object type, so may have instances (e.g., Australia) that exist independently of participating in any fact type other than its reference scheme.  This independence setting may be ignored in LogiQL, since it is assumed by default in the absence of a mandatory role constraint.  The preferred reference scheme for Country is depicted by the reference mode ".Name" shown in parenthesis.  The border information is modeled using the binary fact type Country borders Country.  The uniqueness constraint bar spanning this fact type indicates that this relationship is many-to-many.  The lack of any mandatory role dot on this fact type indicates that each of its roles is optional. 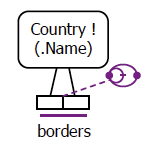 In Figure 1, the ring constraint shape is compound, combining two ring constraints.  The first ring constraint ensures that no country borders itself, as illustrated by the data in Table 1.  For example, Belgium cannot border Belgium.  In this case, the borders relationship is said to be irreflexive.

Notice that in Table 1 each pair of bordering countries is included twice in the data, once for each way of ordering the pair.  The second ring constraint ensures that if the fact that a given country borders another given country is recorded, then so is the inverse fact that the second country borders the first country.  For example, if Belgium borders France, then France must border Belgium.  In this case, the borders relationship is said to be symmetric.  Hence, in this example, the borders fact type is both irreflexive and symmetric.

Figure 3(a) schematizes the same universe of discourse depicted in Table 1 as an Entity Relationship diagram in Barker notation (Barker ER).[3]  The Barker ER schema depicts the primary reference scheme for Country by prepending an octothorpe "#" to the patient name attribute.  The asterisk "*" prepended to the country name attribute indicates that this attribute is mandatory.  The dashed line for the borders relationship indicates that each of its roles is optional for Country.  The crowsfoot at both ends indicate that the relationship is many-to-many.  Predicate readings are provided at each end of the relationship.  Barker ER has no graphic notation for ring constraints, so these constraints are not captured in the diagram.

Figure 3(b) schematizes Table 1 as a class diagram in the Unified Modeling Language (UML).[11]  The UML class diagram depicts the primary identification for Country by appending "{id}" to the name attribute.   The name and attribute by default has a multiplicity of 1, so is mandatory and single-valued.  The "0..*" multiplicities at the end of the borders association indicate that each country has zero or more bordering countries.  Names are provided for each association role.  UML has no graphic notation for ring constraints, so these constraints are not captured in the diagram.

The first line of the LogiQL code declares Country as an entity type whose instances are referenced by names that are coded as character strings.  The colon ":" in hasCountryName(c:cn) distinguishes hasCountryName as a refmode predicate, so this predicate is injective (mandatory, 1:1).  Comments are prepended by "//", and describe the constraint declared in the code immediately following the comment.  For example, the irreflexive ring constraint expressed in LogiQL as "!borders(c, c)" corresponds to the logical formula "∀c(Country c  →  ~ c borders c)".Country(c), hasCountryName(c:cn) -> string(cn).

Figure 4.  Invoking the addblock command in the REPL tool.

Now copy the schema code provided above to the clipboard (e.g., using Ctrl+C), then paste it between the quotes (e.g., using Ctrl+V), and then press the Enter key.  You are now notified that the block was successfully added, and a new prompt awaits your next command (see Figure 5).  By default, the REPL tool also appends an automatically-generated identifier for the code block.   Alternatively, you can enter each line of code directly, using a separate addblock command for each line.

Delta rules to add or modify data are entered using the exec (for 'execute') command.  To invoke the exec command in the REPL tool, type "e" and then select exec from the drop-down list.  A space character is automatically appended.  Typing a single quote after the exec command and space causes a pair of single quotes to be appended, with your cursor placed inside those quotes ready for your delta rules.  Now copy the lines of data code provided above to the clipboard (e.g., using Ctrl+C), then paste it between the quotes (e.g., using Ctrl+V), and then press the Enter key.  A new prompt awaits your next command (see Figure 6).

Now that the data model (schema plus data) is stored, you can use the print command to inspect the contents of any predicate.  For example, to list the names of all the recorded countries, type "p" then select print from the drop-down list, then type a space followed by "C", then select Country from the drop-down list, and press Enter.  Alternatively, type "print Country" yourself and press Enter.  Figure 7 shows the result.  By default, the REPL tool prepends a column listing automatically-generated internal identifiers for the returned entities.   Similarly, you can use the print command to print the extension of the other predicates. 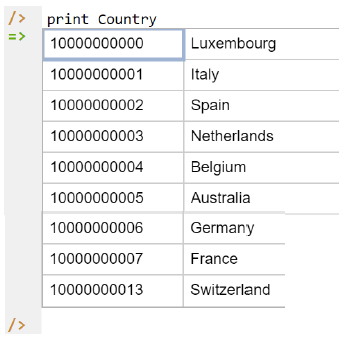 Figure 7.  Using the print command to list the extension of Country.

As discussed in previous articles, to perform a query you specify a derivation rule to compute the facts requested by the query.  For example, the following query may be used to list the names of those countries that border Belgium.  The rule's head uses an anonymous predicate to capture the result derived from the rule's body.  The head variable cn is implicitly universally quantified.  The variables c1 and c2 introduced in the rule body are implicitly existentially quantified.

In LogiQL, queries are executed by appending their code in single quotes to the query command.  To do this in the REPL tool, type "q", choose "query" from the drop-down list, type a single quote, then copy and paste the above LogiQL query code between the quotes and press Enter.  The relevant query result is now displayed as shown in Figure 8.

Figure 8.  A query to list the names of those recorded countries that border Belgium.

Using a Derivation Rule to Ensure that a Relationship is Symmetric

With a symmetric relationship, you can enforce the symmetry either by a symmetric ring constraint, as discussed in the previous section, or by using a derivation rule.  We now consider the second approach. For ease of reference, the earlier countries report is repeated in Table 2, with the fact that Belgium borders France shown in blue and the fact that France borders Belgium shown in green.  Our LogiQL program will use the asserted predicate preborders(c1, c2) to mean that country c1 borders country c2, and the name of c1 alphabetically precedes the name of c2.  This alphabetic precedence is enforced by a constraint in the program, and green facts (where the first country name succeeds the second) are derived rather than being asserted, thus significantly reducing the data entry task.

Table 2.  Extract from a report listing each country and its bordering countries (if any).

The ORM schema in Figure 9 may be coded in LogiQL as follows.  The derivation rule uses "<-" for inverse implication (read as "if") and a semicolon ";" for inclusive logical disjunction (read as "or").

The sample data may be coded as shown below.  Note that the explicit assertions of border facts in inverse alphabetical order used in the previous section are omitted since these facts are now derivable.

The schema and data may be entered in the usual way.   As a sample query on this model, the following query returns the name of each country that borders both Belgium and Germany.  Notice that the result (France) preborders just one of these countries.

Figure 10 shows a screenshot with the query result, based on the data provided.

Figure 10.  A query to list the names of recorded countries that border both Belgium and Germany.

The current article discussed how to declare relationships to be irreflexive (using a ring constraint) and symmetric (using a ring constraint or a derivation rule) in LogiQL.  Future articles in this series will examine how LogiQL can be used to specify business constraints and rules of a more advanced nature, including further ring constraints and recursive derivation rules.  The core reference manual for LogiQL is accessible at https://developer.logicblox.com/content/docs4/core-reference/.  An introductory tutorial for LogiQL and the REPL tool is available at https://developer.logicblox.com/content/docs4/tutorial/repl/section/split.html.  Further coverage of LogiQL may be found in [8].