Summary: This is the thirteenth in a series of articles by Terry Halpin on a logic-based approach to business data and rules using a single language to both create and query data models. The previous article discussed recursive derivation rules and how to constrain ring relationships to be acyclic and/or strongly intransitive. In this month's column, Terry discusses how to declare internal and external frequency constraints in ORM and LogiQL. Various other constraints (e.g., value-comparison constraints, object and role cardinality constraints) may be specified graphically in ORM and coded in LogiQL.

The current article shows how to declare internal and external frequency constraints.  The LogiQL code examples are implemented using the free cloud-based REPL (Read-Eval-Print-Loop) tool for LogiQL accessible at https://developer.logicblox.com/playground/.

Figure 1 pictures the nine Egyptian gods collectively known as the Great Ennead of Heliopolis. Each god is identified by its name and is a parent of zero or more gods in the same Ennead. A downwards arrow depicts the parent to child relationship. This example was discussed in the previous two articles [K, L] to illustrate asymmetric, intransitive, acyclic, and strongly intransitive ring constraints. 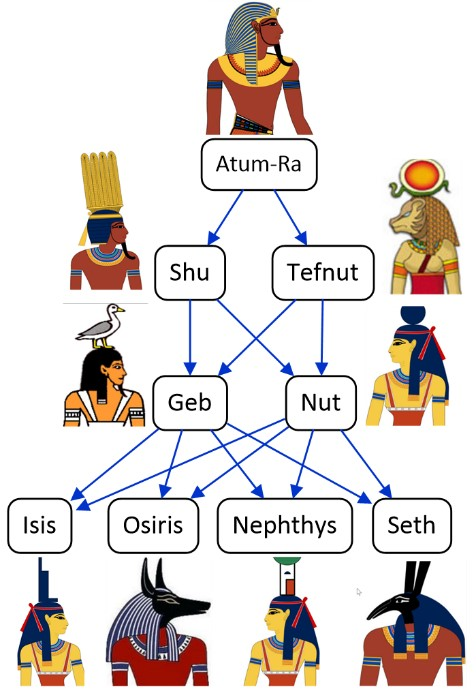 Figure 1.   Parenthood relationships of the Great Ennead of Heliopolis .

Figure 2(a) provides a simplified data model for this example using a populated Object-Role Modeling (ORM)[5], [6], [7] diagram, with the parenthood relationship constrained to be acyclic (which implies asymmetry) and strongly intransitive (which implies intransitivity). The example is schematized in Figure 2(b) as an Entity Relationship diagram in Barker notation (Barker ER)[3], in Figure 2(c) as a class diagram in the Unified Modeling Language (UML)[11], and in Figure 2(d) as a relational database (RDB) schema. For detailed discussion of these schemas see the previous two articles [K, L]. The UML, Barker ER, and RDB schemas have no graphical way to depict ORM ring constraints. 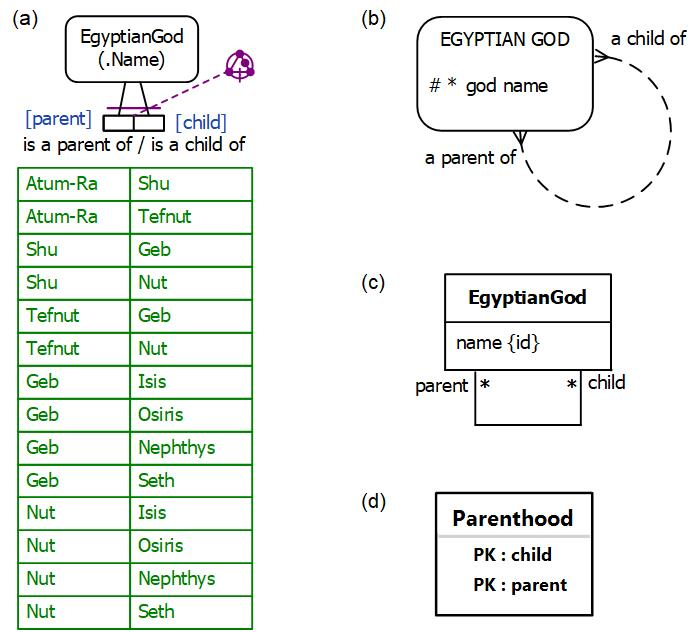 Looking back at Figure 1, it's easy to see that Atum-Ra has no parent, Shu and Tefnut each have exactly one parent, and the other gods each have two parents. In other words, each Egyptian god in the Ennead has at most two parents. Since only whole instances are allowed, here "at most 2" means "0, 1, or 2". The 0 case is captured by declaring the child role in the parenthood fact type to be optional for an Egyptian god, as indicated by the lack of a mandatory role constraint on the child role. Atum-Ra has no parents (i.e., 0 parents) so does not appear in the fact column for the child role in Figure 2(a). 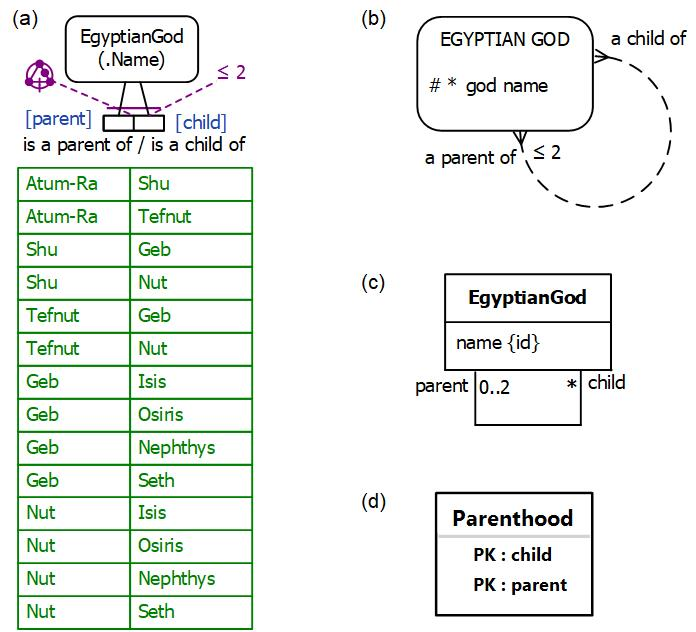 Figure 3.  Adding a constraint that an Egyptian god has at most two parents in (a) ORM, (b) Barker ER, and (c) UML.

Using the NORMA tool for ORM[4] entering minimum and maximum frequencies of 1 and 2 respectively for the child role causes the internal frequency constraint to be displayed as the numeric restriction "≤ 2" (for "at most 2") attached by a dotted line to the role being constrained, as illustrated in Figure 3(a). The NORMA tool for ORM verbalizes this constraint as "Each EqyptianGod is a child of at most two instances of EqyptianGod". This is equivalent to the longer formulation "Each God1 in the population of "God1 is a parent of God2" occurs there at least 1 and at most 2 times." Such longer verbalizations are used when the minimum frequency is above 1.

Figure 3(b) shows how to depict the ORM frequency constraint in the Barker ER notation, where it is known as a cardinality constraint. Here the "≤ 2" restriction appears at the parent role end of the parenthood relationship rather than the child role. This differs from ORM's convention where attaching a constraint to a role constrains the population of that same role. The optionality of the child role is shown by using a dashed line for that end of the relationship.

Figure 3(d) depicts the example in relational database notation. Unlike ORM, Barker ER, and UML, this RDB notation has no graphic way to depict the frequency constraint.

As discussed in the previous two articles [K, L], the ORM schema in Figure 3(a) minus the frequency constraint may be coded in LogiQL as shown below. The acyclic and strong intransitivity constraints on the parenthood predicate are enforced by first recursively deriving the ancestorhood predicate then declaring it to be irreflexive and ensuring that no Egyptian god is a parent of a descendant of one of its children.


To implement the "≤ 2" frequency constraint, we need to count the number of times each Egyptian god plays the child role and ensure that this number is 0, 1, or 2. In LogiQL, this is done using the count function, which is one of several aggregate functions (e.g., count, total, min, max) that may be applied to a collection of facts to return a single number. For counting, LogiQL uses a special syntax "agg<<n = count()>>condition", meaning "n is the count of all the facts satisfying condition". For our example, we can derive the number of parents of each Egyptian god using the following LogiQL derivation rule. Recall that an underscore "_" denotes the anonymous variable (read as "something"), so the following rule says that the number of parents of an Egyptian god g equals the count of all the facts where something is the parent of g.

If a god (e.g., Atum-Ra) has no parents, you might expect this count function to return 0. However, in this case the LogiQL count function returns no value at all if it doesn't find any facts satisfying the condition. To ensure that 0 is returned for such empty set cases, we can simply assign 0 as the default value for the count function. This is coded as follows using the lang:defaultValue metapredicate followed by square brackets that enclose the grave accent character "`" followed by function name.

The frequency constraint may now be coded simply as follows, using two characters "<=" for "≤".

For your convenience in entering code to the REPL tool, the full schema code is repeated below.

To enter the schema in the free, cloud-based REPL tool, use a supported browser to access the website https://repl.logicblox.com. The latest version of the REPL tool now appears to require you to explicitly create a workspace before adding code blocks to it. To do this, you may simply enter the following code:

Now copy the full schema code provided above to the clipboard (e.g., using Ctrl+C), then paste it between the quotes (e.g., using Ctrl+V), and then press the Enter key. You are now notified that the block was successfully added, and a new prompt awaits your next command (see Figure 4). By default, the REPL tool also appends an automatically-generated identifier for the code block. Alternatively, you can enter each line of code directly, using a separate addblock command for each line. 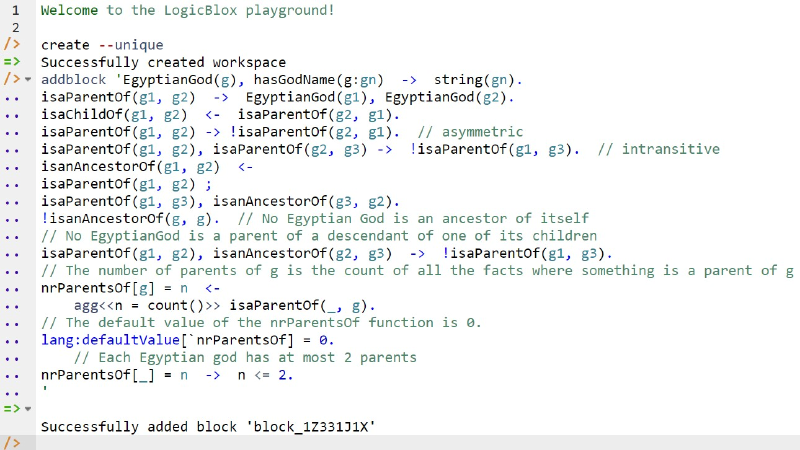 Figure 4.  Creating a workspace and then adding a block of schema code.

The data in Figure 3(a) may be entered in LogiQL using the following delta rules. A delta rule of the form +fact inserts that fact. Recall that plain, double quotes (e.g., ",") are needed here, not single quotes or smart double quotes. Hence it's best to use a basic text editor such as WordPad or NotePad to enter code that will later be copied into a LogiQL tool.

Delta rules to add or modify data are entered using the exec (for 'execute') command. To invoke the exec command in the REPL tool, type "e", and then select exec from the drop-down list. A space character is automatically appended. Typing a single quote after the exec command and space causes a pair of single quotes to be appended, with your cursor placed inside those quotes ready for your delta rules. Now copy the lines of data code provided above to the clipboard (e.g., using Ctrl+C), then paste it between the quotes (e.g., using Ctrl+V), and then press the Enter key. A new prompt awaits your next command (see Figure 5).

Now that the data model is stored, you can use the print command to inspect the contents of any predicate. For example, to list the names of the Ennead gods, type "p" then select print from the drop-down list, then type a space followed by "E", then select EgyptianGod from the drop-down list and press Enter. The print command for the nrParentsOf predicate fails to include the 0 result for Atum-Ra, but this value can be returned by using a query, as discussed below.

To perform a query, you specify a derivation rule to compute the facts requested by the query. For example, the following query may be used to list the god name and number of parents of each Egyptian god. The rule's head uses an anonymous predicate to capture the result derived from the rule's body. The head variables gn and n are implicitly universally quantified. The variable g introduced in the body is implicitly existentially quantified.

In LogiQL, queries are executed by appending their code in single quotes to the query command. To do this in the REPL tool, type "q", choose "query" from the drop-down list, type a single quote, then copy and paste the above LogiQL query code between the quotes and press Enter. The relevant query result is now displayed as shown in Figure 6. 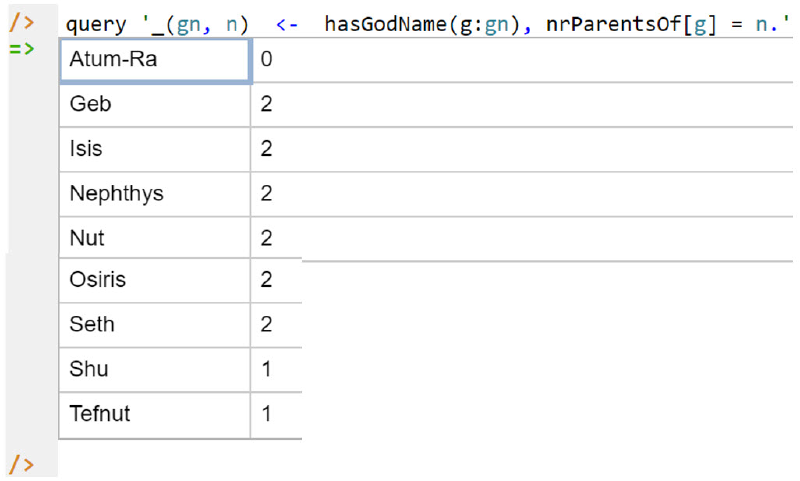 Figure 6.  A query to list the god name and the number of parents of each of the Ennead gods.

The numeric expression in an ORM frequency constraint may take various forms, such as n (exactly n), ≤ n (at most n), ≥ n (at least n), n..m (at least n and at most m). These may be coded in LogiQL in a similar way to that discussed above.

Figure 7.  An ORM schema with a compound frequency constraint.

An ORM schema for this example is shown in Figure 8. The circled "≤ 2" external frequency constraint applied to the roles hosted by Student and Course indicates that for each state of the database, each (student, course) pair that populates those roles does so at most twice. This constraint verbalizes thus: For each Student and Course, there are at most 2 Enrolment instances where that Enrollment is by that Student and is in that Course. 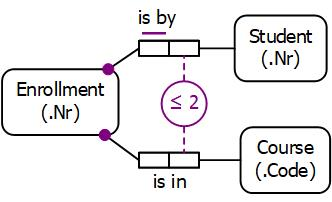 Figure 8.  An ORM schema with an external frequency constraint.

This ORM schema may be coded in LogiQL as follows. The external frequency constraint is enforced by using the count function to derive the number of enrollments of a given student in a given course, and then constraining that number to be at most 2.

/* For each student s who enrolled in course c,
n is the number of cases where there exists an
enrollment e involving that s and that c */
nrEnrollmentsFor[s, c] = n  <-
agg<<n = count()>>studentInvolvedIn[e] = s, courseInvolvedIn[e] = c.

The current article discussed how to declare internal and external frequency constraints in ORM and LogiQL. Various other constraints (e.g., value-comparison constraints, object and role cardinality constraints) may be specified graphically in ORM and coded in LogiQL.  The core reference manual for LogiQL is accessible at https://developer.logicblox.com/content/docs4/core-reference/.  An introductory tutorial for LogiQL and the REPL tool is available at https://developer.logicblox.com/content/docs4/tutorial/repl/section/split.html.  Further coverage of LogiQL may be found in [8].