Summary: Business rules should be validated by business domain experts, and hence specified using concepts and languages easily understood by business people. This is the fourteenth in a series of articles on expressing business rules formally in a high-level, textual language. In this month's column, Terry Halpin discusses discusses why subtype definitions are needed, and how to verbalize them.

Business rules should be validated by business domain experts, and hence specified in a language easily understood by business people.  This is the fourteenth in a series of articles on expressing business rules formally in a high-level, textual language.  This article discusses why subtype definitions are needed, and how to verbalize them.

There are three main reasons for including subtyping in an information model.  The most important reason is to constrain certain roles to be played only by specific subtypes.  For example, in a hospital domain, prostate status may be recorded only for male patients, and pregnancy counts (number of pregnancies) may be recorded only for female patients.  Figure 1 depicts this situation in ORM 2[16], UML[18], and Barker ER[1] notations. 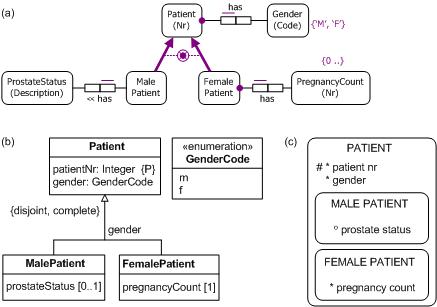 Figure 1.  MalePatient and FemalePatient subtypes in (a) ORM2, (b) UML, and (c) Barker ER notation.

The {P} notation in the UML figure is a non-standard extension indicating preferred identification scheme (and hence mandatory and unique).  Previous articles used the ORM notation supported in Microsoft Visio for Enterprise Architects.[17]  ORM 2 is a second generation version of ORM supported in the Neumont ORM Architect (NORMA) tool, an open source plug-in to Visual Studio .NET 2005.  As an early prototype of NORMA should be released by the time this article is published, and ORM 2 incorporates significant advances over ORM 1, the ORM 2 notation will be used in this and future articles in this series.  As indicated in Figure 1(a), ORM 2 diagrams no longer use arrow tips on uniqueness constraint bars, and object type names are enclosed by default in rounded rectangles rather than ellipses (as a configuration option, ellipses or hard rectangles may also be used).  ORM 2 diagrams are also more compact than corresponding ORM 1 diagrams.

A second reason for including subtyping is to explicitly display taxonomy, by displaying categories resulting from a classification scheme.  In our current example, gender is used to classify patients into male and female patients.  For such cases, taxonomy may be modeled more compactly without subtyping, simply by declaring the relevant fact type in the classification scheme (here Patient is of Gender), together with a listing of the possible values of the relevant value type value (here GenderCode) by declaring a value constraint (here {'M', 'F'}) or by entering them in the type's population (if the number of instances is large or variable).

In some cases, this is the only practical way to declare a classification scheme.  For example, there are hundreds of different kinds of animal.  It is far more efficient and compact to enter these by populating AnimalKind in the fact type Animal is of AnimalKind, than by explicitly introducing hundreds of subtypes for Dog, Cat, Kangaroo, etc.  Of course, if there are some specific roles of interest for a few specific subtypes, we would normally introduce just those few subtypes.

A third reason for introducing subtypes is to facilitate reuse of model components, thus leading to efficiency gains in representation and implementation.  For example, if we want to know details such as name, gender, address, and phone number for both male and female patients, it is more convenient to attach these details to the supertype Patient, from which MalePatient and FemalePatient inherit, rather than attach them directly to MalePatient and FemalePatient.

Subtype Discriminators and the Need for Subtype Definitions

The schema under discussion requires that each patient has exactly one of two genders, referenced by the gender codes "M" and "F", each male patient has at most one prostate status, referenced by a description (e.g., "OK", "benign enlargement"), and each female patient has exactly one pregnancy count, referenced by a whole number (0, 1, 2, etc.).  As discussed in the previous article [15], the subtyping constraints in all three notations ensure that MalePatient and FemalePatient are mutually exclusive and collectively exhaustive of Patient (i.e., they form a partition of Patient).

For discussion purposes, suppose the schema is populated with five facts, as shown in the ORM model in Figure 2.  Here patients 101 and 103 are male, patient 102 is female, patient 102 has a prostate status of OK, and patients 101 and 103 have each had four pregnancies.  Notice that this population satisfies all the constraints.  But there is still something wrong.  What is the problem?

Figure 2.  The constraints are satisfied, but there is still a problem with the population.

You no doubt spotted that the population incorrectly assigns a prostate status to the female patient, while assigning a pregnancy count to the male patients.  This nonsensical situation is allowed by the schema, because the schema currently provides no formal connection between the classification fact type (Patient has Gender) and the subtypes (MalePatient and FemalePatient).

This is the case not just for the ORM schema, but also for the UML and Barker ER schemas.  The UML schema in Figure 1(b) goes part of the way by including gender as a discriminator on the subtype graph.  Though not supported in Barker ER, discriminators are supported in some other versions of ER as well as the ER-relational hybrid IDEF1X (e.g., see [2] p. 342).  The gender discriminator informally enables a human reader to understand that patients are being classified into subtypes on the basis of gender, and humans may use their background knowledge to associate the name 'MalePatient' with the gender code 'm' and the name 'FemalePatient' with the gender code 'f'.  But the UML schema provides no formal specification of this understanding, so without further information a computer would still accept the population shown.

In cases like this, where both the classification fact type(s) and related subtypes are included in the schema, the only solution to this problem is to require formal definitions for subtypes, thus establishing the required formal connection.  Of the three approaches mentioned, only ORM stipulates this requirement as part of its modeling procedure, and only ORM requires that such definitions be verbalized at a high enough level to be readily understood by non-technical domain experts.  In ORM the subtype definitions are normally verbalized thus:

Each MalePatient is a Patient who is of Gender 'M'

Each FemalePatient is a Patient who is of Gender 'F'

The pronoun 'who' is used if Patient is declared to be a personal object type; otherwise 'that' is used.  If desired, the verbose form of the gender reference may be used.  For example, "Gender 'M'" may be automatically unabbreviated to "Gender that has GenderCode 'M'".

Though not required in UML, one could extend that approach by requiring subtype definitions for cases like our patient example.  UML already provides OCL[19] as a language that could be used to express subtype definitions formally.  However OCL expressions are often too mathematical in nature to be readily understood by non-technical business people, so we recommend that ORM-like verbalizations be used instead (for which a transform could be provided to map to OCL if desired).

In ORM 1, the modeling procedure requires that all subtypes be formally and fully defined in terms of roles played by their supertype(s).  In ORM 2, this requirement has been relaxed to allow three kinds of subtypes:  asserted, fully-derived, and partly-derived.

An asserted subtype is one for which no subtype definition is provided -- one merely asserts the existence of the subtype without defining it in terms of something else.  For example, suppose that for some reason we do not want to include Patient is of Gender as a base fact type.  Figure 3 illustrates this situation in all three notations.  In such a case, the totality and exclusion subtyping constraints must be declared, since they are no longer implied, and they may be verbalized as discussed in the previous article[15].

Although this example is somewhat contrived, since gender is normally recorded explicitly in such a case, it is common practice to do this kind of thing in programming, especially where the superclass is declared abstract.  However, the notion of subclass in programming is sub-conceptual.  Instead of meaning subtype in the conceptual sense, a subclass is basically a "factory" for creating instances, and since instances can be created in only one factory, migration between subclasses is not possible.  In contrast, migration between subtypes is allowed for those subtypes that do correspond to fundamental sortals (e.g., a person who is an instance of InPatient might migrate later to become an instance of OutPatient). 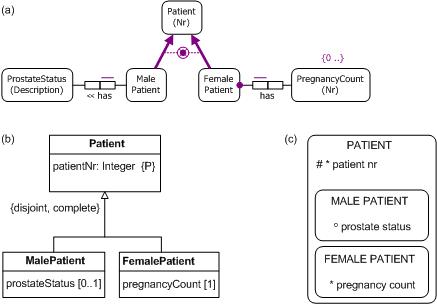 In addition to asserted subtypes, ORM 2 allows fully-derived subtypes (full subtype definition provided) and partly-derived subtypes (partial subtype definition provided).  Subtype definitions are supported as derivation rules in a high level formal language, and may be displayed in text boxes as footnotes on the diagram.  The formal grammar and precise syntax for ORM 2's formal textual input language (as distinct from its output verbalization language) is still being refined, but the following examples are indicative.  Equivalence (if and only if) rules are used for full derivation, and implication (if) rules for partial derivation.  Here are sample rules in both ORM 2's textual language and predicate logic for fully and partly derived subtypes respectively:

Expressing such definitions formally, instead of as mere comments, ensures they are unambiguous, and makes it possible to generate code automatically to enforce the constraints captured by the definitions.

In modeling complex business domains, one often encounters subtyping schemes where a subtype is defined using multiple fact types.  In such cases, the subtype definitions are not readily expressible using the simple discriminator approach mentioned earlier.  Figure 4 shows a simple example, with the subtype definitions below the diagram.  In general, subtype definitions may be of arbitrary complexity, and (as in our earlier Patient example) the constraints that they express cannot be fully captured by simple totality and exclusion constraints. 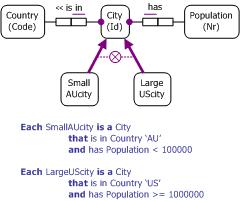