Summary: Business rules should be validated by business domain experts, and hence specified using concepts and languages easily understood by business people. This is the fifteenth in a series of articles on expressing business rules formally in a high-level, textual language. In this month's column, Terry Halpin discusses the verbalization of basic derivation rules.

Business rules should be validated by business domain experts, and hence specified in a language easily understood by business people.  This is the fifteenth in a series of articles on expressing business rules formally in a high-level, textual language.  This article considers the verbalization of basic derivation rules.

Many business domains include information that is derived from other information.  As a simple example, suppose we are interested in knowing the height, width, and area of various windows.  If we know the height and width of a window, we can compute its area simply by multiplying its height by its width.  Figure 1 models this situation in ORM 2[16] and UML[17] notations.  From an ORM perspective, we have three fact types:  Window has height of Length; Window has width of Length; and Window has area.  The asterisk "*" postfix on the area fact type indicates that it is derived, and the textual derivation rule declares how it is derived from the other fact types.  In UML, the three fact types are all depicted as attributes.  A slash "/" prefix indicates the derived attribute, and an attached note provides the derivation rule.  The {P} notation in the UML figure is a non-standard extension indicating preferred identification scheme (and hence mandatory and unique).  As industrial versions of Entity-Relationship (ER) modeling typically provide no graphical means of depicting derived information, we ignore them in this article.

In this example, both ORM and UML express the derivation rule in attribute style, where area, height, and width may be viewed as attributes of Window.  To enable this, the ORM schema includes the relevant role names (shown in square brackets) to be used as attribute names in rule verbalization.  ORM uses a for-each clause to declare the context of the rule.  Within the rule, "*" denotes multiplication.

In cases like this where the derivation rule involves simple arithmetic, attribute style is typically more compact and readable than relational style.  Mixed style allows fact types to be specified using predicate readings and role names within the same rule.

A fact type that is not derived using other fact types is said to be primitive.  Here the height and width fact types are primitive, and the area fact type is derived.  Notice that the equation area = height * width has three variables, with one degree of freedom.  In principle, any of these three variables could have been chosen as derived, with the others primitive.  For example, if we know the area and height, we can derive the width.  And if we know the area and width, we can derive the height.  At a more fundamental level then, the rule verbalization

may be considered a constraint that restricts the possible triples of values that may be assigned to area, height, and width.  Although "area" is mentioned first in the equation above, there is nothing in the underlying logic that forces us to say that this is the only quantity that can be derived.  In principle, one could allow any two values in the triple to be entered (area and height, or area and width, or height and width), then use this constraint to determine the other value.  To indicate this intent in ORM 2, each of the fact types is marked "*-" signifying partly derived, and the derivation rule is flagged this way too.

Figure 2.  The fact types are partly derived:  an instance of any one may be derived from the others.

Using "iff" to abbreviate "if and only if", the relational version of the rule may also be specified as a mere constraint thus:

While it would be unusual to apply partial derivation in this Window example, this technique is of practical use in applications such as loan selections, where one might want to enter, say, any two of percentage rate, loan amount, and desired loan term, to see what the other figure will be.

Once we decide that we will use the constraint simply to derive the area, this choice is reflected by marking the area fact type as fully derived in the schema diagram (with an asterisk in ORM, and a slash in UML).  The left hand side of the attribute style equation, or the head of the relational style "iff" rule, is now understood to be the derived quantity, and the "Define as" relational version of the rule may also be used.

When the derivation rule is based on conceptual joins rather than mathematical operations, the relational style of rule verbalization is often more natural.  For example, see the ORM rule for deriving the fact type Person is an uncle of Person in Figure 3(a).  Here subscripts are used to distinguish different occurrences of the Person variable.  For simplicity, the relevant ring constraints[12] are omitted.  In ORM, each fact type must have at least one relationship reading, whereas role names are optional.

A UML class diagram for this situation is shown in Figure 3(b).  In UML, associations must have role names, whereas a relationship reading is optional.  When roles of an association are played by instances of the same class, distinct role names must be provided to disambiguate expressions that use role names for navigating the schema, as in this example.  Here both the uncle role and the nephewOrNiece role are derived.  Their derivation rules make use of the dot notation familiar to programmers.

Figure 4    Use of role names and the of-notation.

Many derivations are of a summary nature, where the information held in the derived fact type instance captures only part of the information in the fact type instances (primitive or derived) used to derive it.  In such cases, there is only one choice as to which of many fact types may be selected for derivation (unlike the area equation discussed earlier).  For example, you can derive a grade point average from a set of grades, but you can't derive the set of grades from the average.  Likewise, you can derive your age in years from your birth date and the current date, but not vice versa.

As a classic business example, consider the line item schema shown in Figure 5.  A line item is identified by combining its line number and its order (shown in ORM 2 by the circled double line, and in UML by an informal note).  We compute line totals as the product of the quantity and unit price.  Although unlikely, in principle we could have chosen instead to compute the quantity from the unit price and line total.  However, the total charge for the order however must be derived, since it is computed by summing the individual line totals for that order.  We cannot derive the line totals from the total charge, since there are many possible sets of line totals that would result in the same total charge for the order.

Figure 5.  Deriving line totals and order totals in (a) ORM and (b) UML.

Typically, instances of derived fact types are derived on query (the computation to derive them is not performed until requested).  This is known as lazy evaluation (don't evaluate until you have to).  In such cases, the derived facts need not be stored.  In rare cases, however, the business may decide to derive on update, performing the calculation as soon as the underlying facts used in the derivation are updated.  This is called eager evaluation.  In such cases, the derived facts are actually stored.  This is indicated in ORM by marking the fact type to be derived and stored with a double asterisk "**". 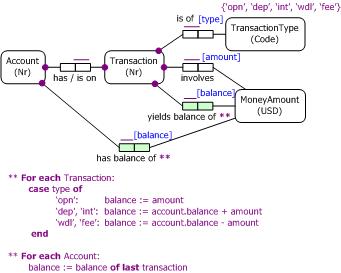 Figure 6.  Account balances are derived on update, and then stored.

A simplified specification of the derivation rules is shown.  This assumes that the only types of transaction types are opn (open account with an initial, possibly zero deposit), dep (later deposit), int (interest earned), wdl (withdrawal), and fee (bank fee).  Also, predefined semantics for last are assumed (based on the highest transaction number for the account).  Though not shown here, this example also illustrates one of those rare cases requiring an immutable constraint (called "frozen" in UML) to make the transactions immutable, in this case for auditing purposes.

While the syntax of the rules resembles that of a programming language, it is arguably still high level enough to be understood by a non-technical domain expert.  Alternative syntaxes are possible to make the rules more readable.  For example, "is assigned the value of" may be used instead of ":=", and the case-clause may be replaced by a set of if-clauses.  The syntax of ORM's textual language for derivation rules and constraints is still being refined, so this is meant to be illustrative only.  It is quite a challenge to design a formal language that is rich enough to capture complex rules, while still being intelligible to non-technical people.