Summary: This is the eighth in a series of articles on a logic-based approach to business data and rules using a single language to both create and query data models. The previous article focused on how to declare subset constraints between compound role sequences, including cases involving join paths. In this month's column, Terry Halpin discusses how to declare exclusion and equality constraints between compound role sequences.

The current article discusses how to declare exclusion and equality constraints between compound role sequences.  The LogiQL code examples are implemented using the free, cloud-based REPL (Read-Eval-Print-Loop) tool for LogiQL that is accessible at https://developer.logicblox.com/playground/.

Table 1 shows an extract from report of a publishing company containing data about books and their authors, as well as the reviewers of the book if known.  Each book is identified by its International Standard Book Number (ISBN).  Each author and reviewer is identified by a Person Number (PNr) assigned by the publishing company.  Other details about books and persons (e.g., book title, person name), are maintained but are not of interest for this discussion.  A blank entry for reviewers indicates that the book has not yet been assigned any reviewer.  As an optional exercise, you might like to specify a data model for this example, including all relevant constraints, before reading on.

Table 1.  Report extract of data about books, their authors, and their reviewers (if known).

Figure 1 models this example with a populated Object-Role Modeling (ORM)[12] [13] [14] diagram.  The sample facts are shown in fact tables next to the relevant fact types.  The preferred reference schemes for Book and Person are depicted by the reference modes "ISBN" and ".Nr" shown in parentheses.  The mandatory role dot and Book's role in the fact type Book is authored by Person indicates that each book has at least one author.  The uniqueness constraint bar spanning both roles of the binary fact types Book is authored by Person and Book is reviewed by Person indicates that each of these relationships is many-to-many. 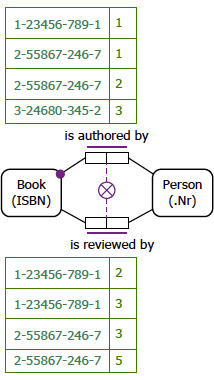 The NORMA tool[4] verbalizes this subset constraint as follows:

Figure 2(a) schematizes the same universe of discourse depicted in Table 1 as an Entity Relationship diagram in Barker notation (Barker ER) [3]. The Barker ER schema depicts the primary reference scheme for Book and Person by prepending an octothorpe "#" to the isbn and person nr attributes respectively. The asterisk "*" prepended to the isbn and person nr attributes indicates that these attributes are mandatory. The half solid, half dashed line indicates that authorship relationship is mandatory for Book and optional for Person. A crowsfoot at both ends of the relationship lines indicates that the relationships are many-to-many.  Barker ER has no graphical way to display the exclusion constraint.

Figure 2(a) schematizes the same universe of discourse depicted in Table 1 as an Entity Relationship diagram in Barker notation (Barker ER).[3]  The Barker ER schema depicts the primary reference scheme for Book and Person by prepending an octothorpe "#" to the isbn and person nr attributes respectively.  The asterisk "*" prepended to the isbn and person nr attributes indicates that these attributes are mandatory.  The half-solid, half-dashed line indicates that authorship relationship is mandatory for Book and optional for Person.  A crowsfoot at both ends of the relationship lines indicates that the relationships are many-to-many.  Barker ER has no graphical way to display the exclusion constraint. 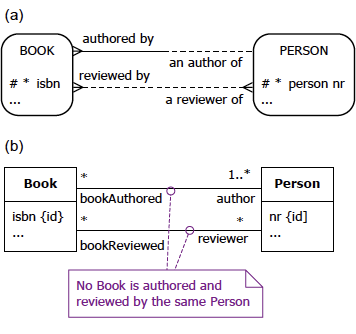 Figure 2(b) schematizes Table 1 as a class diagram in the Unified Modeling Language (UML).[18]  The UML class diagram depicts the primary identification for Book and Person by appending "{id}" to the isbn and nr attributes respectively.  The isbn and nr attributes by default have a multiplicity of 1, so are mandatory and single-valued.  Names are provided for each association role.  The multiplicities at the end of the authorship association indicate that each book has one or more authors, and each person authors zero or more books.  The multiplicities at the end of the review association indicate that each book has zero or more reviewers, and each person reviews zero or more books.  Like Barker ER, UML has no graphic symbol for an exclusion constraint, but here the constraint has been declared informally in a textual note.

The first line of the LogiQL code declares Book as an entity type whose instances are referenced by ISBNs that are coded as strings.  The colon ":" in hasISBN(b:isbn) distinguishes hasISBN as a refmode predicate, so this predicate is injective (mandatory, 1:1).  Similarly, the next line declares the entity type Person along with its reference mode.  The next two lines declare the typing constraints on the isAuthoredBy and isReviewedBy predicates, each of which is many-to-many.

Comments are prepended by "//", and describe the constraint declared in the code immediately following the comment.  An underscore "_" denotes the anonymous variable, is used for existential quantification, and is read as "something".  For example, the mandatory role constraint expressed in LogiQL as "Book(b)  ->  isAuthoredBy(b, _)." corresponds to the logical formula "∀b(Book b  →  ∃x b isAuthoredBy x)".

Figure 3.  Invoking the addblock command in the REPL tool.

Now copy the schema code provided above to the clipboard (e.g., using Ctrl+C), then paste it between the quotes (e.g., using Ctrl+V), and then press the Enter key.  You are now notified that the block was successfully added, and a new prompt awaits your next command (see Figure 4).  By default, the REPL tool also appends an automatically generated identifier for the code block.  Alternatively, you can enter each line of code directly, using a separate addblock command for each line. 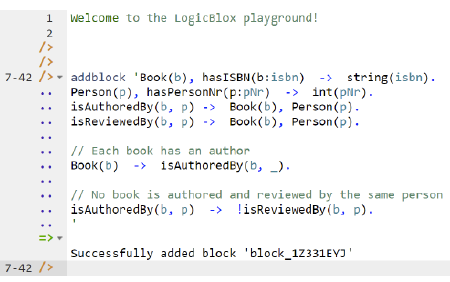 Delta rules to add or modify data are entered using the exec (for 'execute') command.  To invoke the exec command in the REPL tool, type "e" and then select exec from the drop-down list.  A space character is automatically appended.  Typing a single quote after the exec command and space causes a pair of single quotes to be appended, with your cursor placed inside those quotes ready for your delta rules.  Now copy the lines of data code provided above to the clipboard (e.g., using Ctrl+C), then paste it between the quotes (e.g., using Ctrl+V), and then press the Enter key.  A new prompt awaits your next command (see Figure 5).

Figure 5.  Adding the data below the program code.

Now that the data model (schema plus data) is stored, you can use the print command to inspect the contents of any predicate.  For example, to list all the recorded books, type "p" then select print from the drop-down list, then type a space followed by "B", then select Book from the drop-down list and press Enter.  Alternatively, type "print Book" yourself and press Enter.  Figure 6 shows the result.  By default, the REPL tool prepends a column listing automatically-generated, internal identifiers for the returned entities.  Similarly, you can use the print command to print the extension of the other predicates.

Figure 6.  Using the print command to list the extension of a predicate.

As discussed in previous articles, to perform a query, you specify a derivation rule to compute the facts requested by the query.  For example, the following query may be used to list the person number of each person who has authored a book and reviewed a book.  The rule's head _(pNr) uses an anonymous predicate to capture the result derived from the rule's body.  The head variable pNr is implicitly universally quantified.  The variable p introduced in the rule body is implicitly existentially quantified.

In LogiQL, queries are executed by appending their code in single quotes to the query command.  To do this in the REPL tool, type "q", choose "query" from the drop-down list, type a single quote, then copy and paste the above LogiQL query code between the quotes and press Enter.  The relevant query result is now displayed as shown in Figure 7.

To test the exclusion constraint, try adding the following delta rule to assert that the book with ISBN 3-24680-345-2 is reviewed by the person with person number 3.

Since the database already includes a fact asserting that this book is authored by the same person, this update attempt is rejected because it violates the exclusion constraint (see Figure 8).

Figure 8.  Asserting that a book is authored and reviewed by the same person violates the exclusion constraint.

A role sequence appearing as an argument in a set-comparison constraint may be projected from a path involving one or more conceptual joins.  The previous article[11] discussed an example of a subset constraint with a join path.  An example of an exclusion constraint involving a join path is shown in Figure 9.  This is a screenshot from the NORMA tool showing both an ORM schema and the verbalization of the exclusion constraint.  The schema is part of an information system for managing details about research papers submitted to a conference.  The exclusion constraint ensures that people cannot review any research paper authored by someone from their own institute.  This schema applies to a single conference at a time (no history is kept). 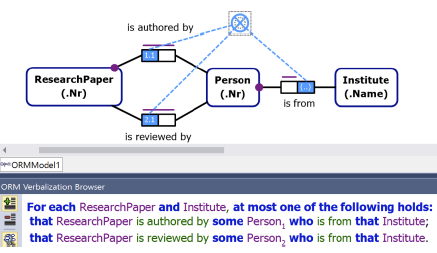 A compound equality constraint restricts the populations of a set of two or more compatible sequences of two of more roles to be equal.  As a simple example, consider the report extract shown in Table 2.  The data is maintained by a weather bureau that records the minimum and maximum temperatures of some Australian capital cities for some months of the current year.

Table 2.  Report extract of monthly temperature extremes (if known) in oC for some Australian capital cities. 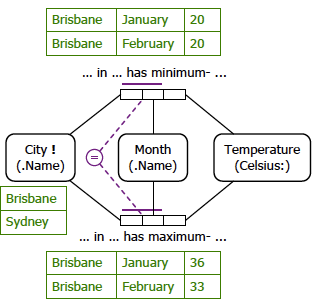 Neither Barker ER nor UML provide graphical support for such constraints and are ignored for this example.  The schema for this example may be coded in LogiQL as follows.  The equality constraint is coded as two subset constraints, one in each direction.

The current article discussed how to declare compound exclusion and compound equality constraints, including a case involving join paths.  Future articles in this series will examine how LogiQL can be used to specify business constraints and rules of a more advanced nature.  The core reference manual for LogiQL is accessible at https://developer.logicblox.com/content/docs4/core-reference/.  An introductory tutorial for LogiQL and the REPL tool is available at https://developer.logicblox.com/content/docs4/tutorial/repl/section/split.html.  Further coverage of LogiQL may be found in [15].